Eye Number One: The Merlin Falcon

Seems that the quiz might have been a bit too hard, since I did not get much of a response, so I guess I will have to provide the answers. All of the birds, who's eyes were pictured where raptors that were trapped and banded up at Hawk Ridge this fall. 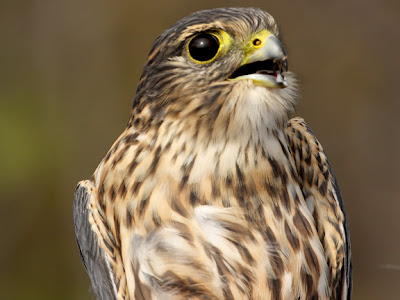 The first eye in the quiz belongs to a merlin falcon. I adopted this bird when I was up at Hawk Ridge on October 18th. 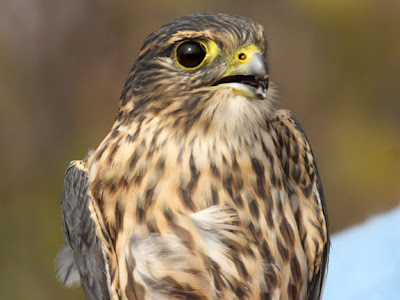 The merlin falcon is one of the smaller falcons in North America, the American kestrel is the only smaller member of the falcon family in North America. Sometimes called a pigeon hawk the merlin is one of a few North American Raptors that is sexually dimorphic, meaning that there is a visible difference between the male and female of the species, which in this case is color. Like many of the passerines that they prey upon the merlin spends its summers in Alaska, Canada and the northern US and migrates to the western and southern United States as well as Mexico, Central and northern South America during the winter. This bird was on his way south when he stopped to check out the bait up at Hawk Ridge.
Posted by Ecobirder at 9:04 PM

Thanks for sharing all that.

I must have missed that quiz but I would never have guessed it anyway. You got some great close ups of it. My SIL raised one of those night hawks from a baby. It looked so cute running on the floor after her with its beak open when it grew larger. The museum of Natural History is alweays calling her when someone brings in baby birds and she raises them with a medicine dropper. Feeds them every few hours. Then when they get old enough to fend for themselves she releases them. Helen

I missed the last post, but I have trouble with raptors when I see the entire body..smile

Hi! We live in Boise, Idaho and my daughter is doing a presentation on the Merlin Falcon and we found your blog. Is there anyway you could email that picture to us so that we could use it in her presentation?! Thanks!
Thueson Family
lynettethueson@gmail.com

I invite you read my blog...specifically about my experience with a beautiful Merlin Falcon yesterday AM, 12 September 2009.

Yesterday morning, sitting under the Pergola in my backyard, gazing into the bird feeders and watching the variety of birds and young ones not even strong enough to fly for long; I noted an unexpected "visitor"......a Merlin Falcon.....propped up on the fence, just looking around, while all others immediately vacated the area upon his arrival.


Needless to say, I was at owe! Wish I had my camera moment. Just like any great moments in life, it did not last long, it flew away and never came back.


I was so excited in this rarity of experience and mesmerized at the beauty of this species....had to go online and 'identify' it as soon as possible.
What an experience.......and another reminder of what a world we live in!
Posted by hunting-scopes at 5:58 AM 0 comments
Labels: Merlin Falco columbarius