With the weather her getting warmer, it got above 60 degrees on Monday, I have been out looking to photograph waterfowl that should begin migrating through the area. Unfortunately we have not consistently had enough warm days for much of the ice to melt yet so mainly I have just been seeing the mallards, geese, swans and common mergansers that have been around for most of the winter. 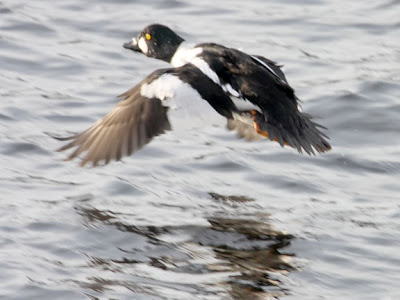 Before the birds moved south I did make a couple of trips down to Douglas Point, which is across from Prescott, WI, where I did get a few nice photos. 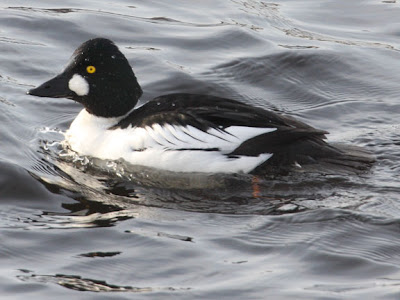 Back in December(12-13) when I took these pics there were several large flocks of common goldeneye hanging around in the river near Prescott. It sometimes made it difficult to find the harlequin duck, who would often swim with groups of golden eye. this was difficult because the goldeneye and harlequin are about the same size and both are diving ducks so they have similar behavior. As winter continued on the number of goldeneyes that stayed decreased. 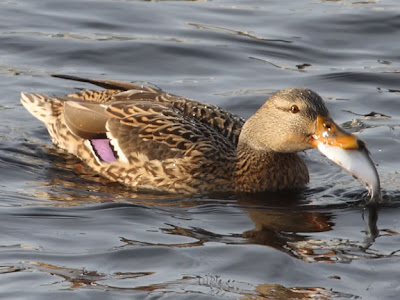 I usually tend to stay away from photographing female ducks, let alone posting the pics, because so many different types of female ducks are difficult to identify because they look so similar to females of other types. However since this duck had just captured a huge fish I decided to capture a couple of her images on my camera and now the blog. 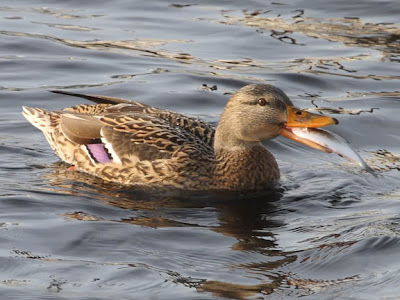 I believe that it is a mallard but since the mallard is a dabbling duck, as compared to a diving duck, it would be lot less likely to be eating a large fish. As a dabbler mallards typically eat aquatic vegetation as well as insects and invertebrates although a little extra protein during the winter is nothing to turn your beak on. It is very possible that the fish was already dead when the mallard found it. Either way as soon as she got the fish lined up correctly in her bill she tipped her head back and ate it whole.

Nice snag. To both you and the female duck.

Great photos! I especially like the one of the duck with the fish. Very nice site.

Great shots! It is interesting to see a mallard eating a fish!

Great shots here. It looks like ducks have to try fish some days!!

Great photos! That duck makes the fish look quite delicious =)

It's eating a fish! I thought at first it was the shape of its beak. Until I saw the second fish eating picture.

That duck looks very pleased with herself - she looks like she's smiling with the fish in her mouth!

The goldeneye has a big head!