Eye Number 4 (D) on the quiz belonged to a northern goshawk. 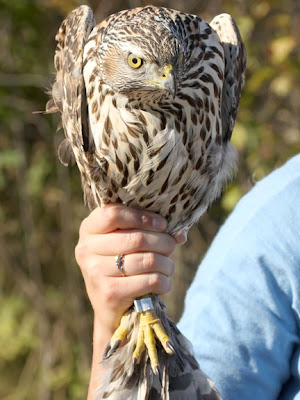 The northern goshawk are found in most northern regions around the world, including Alaska, Canada, Siberia and northern Europe, as well as higher elevations, like the Rocky Mountains, Sierra Nevada Mountains, the Cascades and Mexican Highlands. 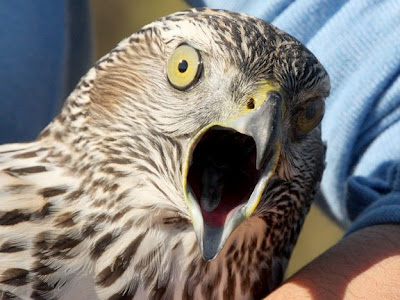 The northern goshawk is the largest member of the Accipiter genus found in North America, the other North American Accipiters would be the sharp-shinned and Cooper's hawks. 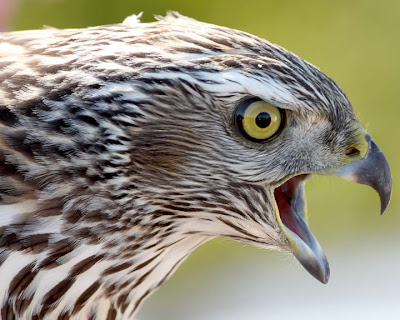 On their breeding territory the northern goshawk can be extremely defensive, often defending its nest from predators as large as wolves, bears or even man. 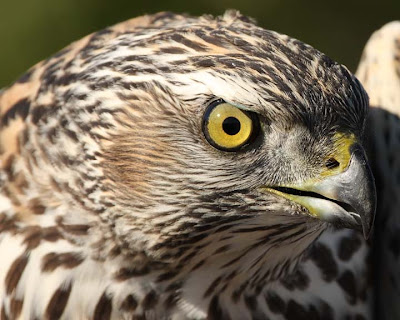 During the winter many goshawks stay on their territory in the north but when the availability of prey becomes scarce then goshawks will begin to move south in search of food. 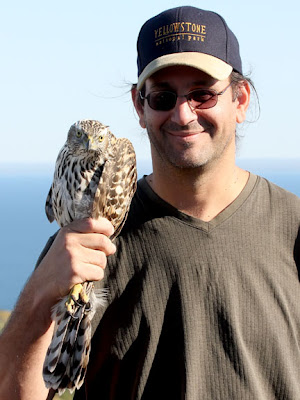 This goshawk was on his way south when he spotted what appeared to be a starling that was injured. What the goshawk found though was that the starling was bait at one of the banding stations that are set up around Hawk Ridge during the fall migration. 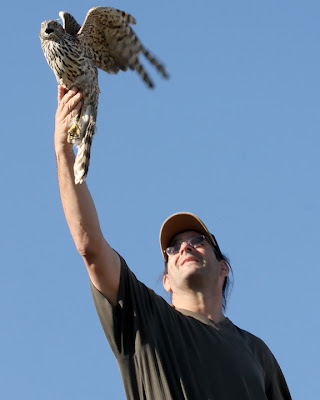 The bird was either trapped in a bow net, a circular net that is placed on the ground in front of the lure which springs shut when a raptor is inside, or mist nets, black nets that the birds do not see as they fly down towards the bait. Once in the mist net the bird is caught in a pocket, that is built into the nets, hopefully long enough for a bander to run out of the blind and secure the captured bird. 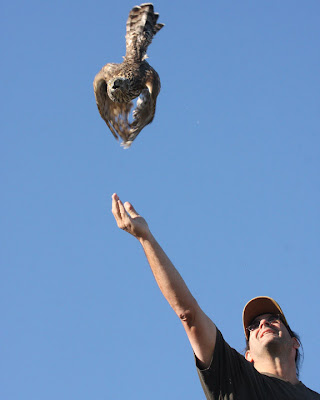 Birds that are captured are banded with a unique band from the US Fish and Wildlife Service. The band is recorded, along with information on the bird such as type, size and approximate age, and then the bird is brought up to the ridge to be adopted. 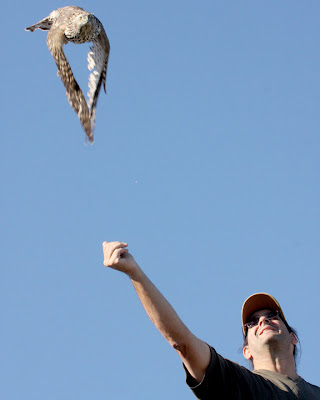 As you can see from the photos, which were taken by Debbie the Educational Director at the Hawk Ridge Observatory, I adopted this bird, on October 10th, 2008, and got the privilege of releasing it unharmed back into the wild. This was not soon enough for the goshawk who, like most of the Accipiters who are banded, was very vocal about the time that he spent with us at Hawk Ridge.
Posted by Ecobirder at 9:28 PM

I have adopted a barn owl from our local rehab facility called 'hawk creek'. They are trying to reintroduce barn owls to western NY..

That second picture makes me laugh every single time without fail.

Some jerk shot and killed the only Goshawk in Maryland, and she had three chicks that died too. What a beautiful bird.