Last Answers on the Eyes of March Quiz: Part 2

The remaining two eyes, in the Eyes of March quiz part 2, belong to two owls that are native to North America. 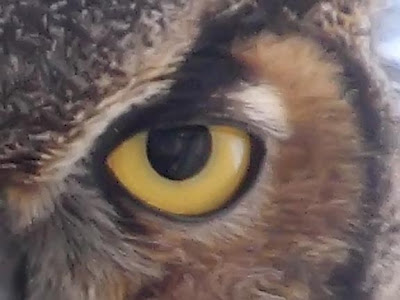 The first, number 5 in the quiz, is the eye of the great horned owl. 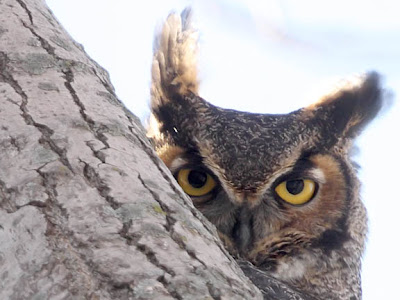 The great horned owl is widely distributed across North America as well as parts of Central and South America. This crepuscular, meaning that it hunts at dusk and dawn, raptor is one of the top avian predators in North America, often taking large prey including other raptors and owls. This is the male member of a nesting pair that I have been photographing. I have quite a few photos of the owls and the nest but I will share them in a future post. 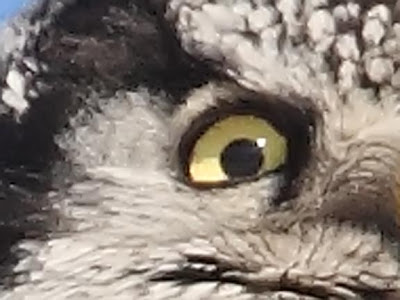 The final eye, number 6, belongs to the northern hawk owl. 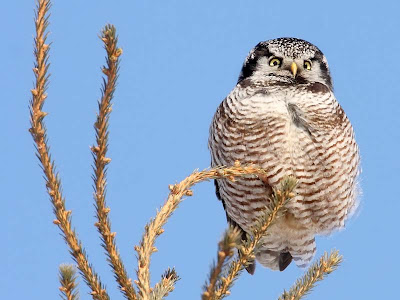 Northern hawk owls are a diurnal, meaning that they hunt in the day light, owl that are typically found in the northern boreal forests of Canada and Alaska. These owls typically eat voles and other small mammals and will sometimes venture south into northern Minnesota in search of prey during the winter time. Most of the birds that head south are younger birds who do not yet have their own territory however from time to time when their prey species have a population crash these owls, as well as other northern species, will invade south in larger numbers. In the winter of 2004-2005 thousands of these birds invaded northern Minnesota in a super invasion. I photographed this bird up in the Sax Zim Bog back in January. There were several northern hawk owls that were spotted fairly reliably up in the bog this winter. I have more pictures of northern hawk owls that I took earlier this year but I will post them later, with some of the other bird pics that I took up in the bog this year.
Posted by Ecobirder at 9:14 PM

I love owls - such interesting creatures both in their behaviour and appearance.

Your photographs are amazing. Both images have loads of character!!