Well this weekend turned out to be very nice weather wise here in Minnesota. Both days turned out to be sunny with mostly clear skies. The temps on both days got up into the mid sixties which is pretty good for late October. This afternoon while I was out enjoying the weather I spotted quite a few meadowhawks and a few large darners still lingering. I also spotted a monarch, most of them flew south weeks ago, as well as a sulfur and a couple of cabbage whites. 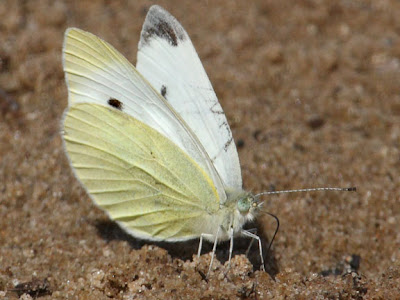 Back on September sixth there were quite a few butterflies around when I visited Afton State Park. Afton is located on the St Croix River a little ways north of where the St Croix joins with the Mississippi. 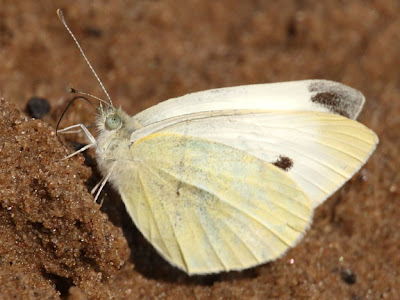 The reason that I went to Afton was to try and find some of the rare clubtail dragonflies that are only found around the St Croix River in Minnesota. but while searching for dragons I came across quite a few butterflies. Although the cabbage white is a common through out most of North America it is not actually a native to the continent. It was accidentally introduced from Europe into Canada in the 1860s. You can tell that this is a male cabbage white because it only has a single spot on the fore wing, females have two spots. 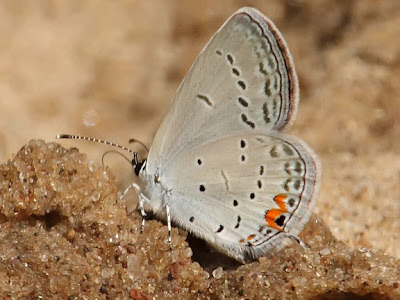 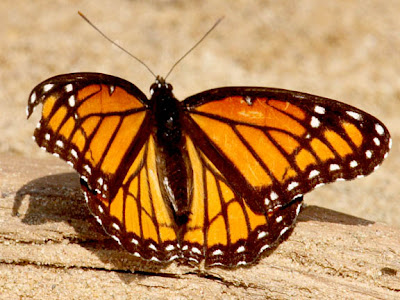 At first glance I thought this next butterfly was a monarch but when I was able to examine it more closely I realised that it was a monarch copycat. 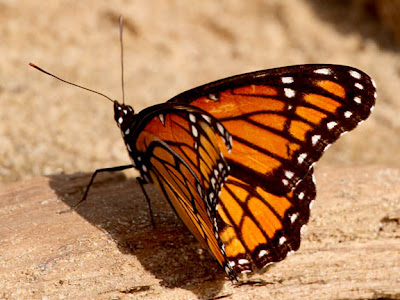 The viceroy resembles the monarch, which is toxic to most predators because of the milkweed it eats when it is a caterpillar, this helps it to avoid predators. Viceroys are noticeably smaller then monarchs and have a stripe running across the hind wing that the monarch does not have. 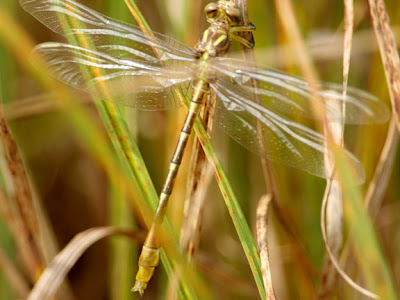 I did find one dragon that appears to be a clubtail. Unfortunately I was only able to get off a couple of quick shots before it flew off across the water where I could not follow. It was not a very great picture but I think that it may be a russet-tipped clubtail, possibly one that only recently emerged. There is only one record of Russet-tipped clubtails in Minnesota and that was in Houston County on the far south east tip of the state, according Odonata Central. Hopefully this information is up to date and correct, if not I am sure that Hap will let me know. I have also found other dragons that I believe were russet-tipped clubtails down at Carpenter Nature Center, which is also on the St Croix River a little south of Afton. I plan to make a photo set and send it to the Minnesota Odonata Survey Project. If I am correct with my identification,hopefully they will be able to tell from the photos, then perhaps the russet-tipped clubtail will get added to the species checklist for Washington County.
Posted by Ecobirder at 8:28 PM

Sorry, I never caught the odonate
bug. I have learned more about
them from reading your blogs than
I ever knew about them. Greatly
enjoyed your shorebird photos from
Duluth, especially the golden.
Have you ever described the equipment you use in the field?
Am considering taking up wildlife
photography and could sure use some
pointers. Thanks.
Hap in New Hope

Eastern tailed-blue looks quite similar to our Indian Cupid. Of course they are in the same genus.

interesting info on the clubtail still a good photo!