No this is not a new meme, at least not yet, it is just a new idea that I have had to showcase birds or animals that live, hunt, or just spend time in the water on Wednesdays. This first Wet and Wild Wednesday features some waterfowl that I photographed on the Minnesota and South Dakota border on my way to a shorebird workshop back on August 8th. 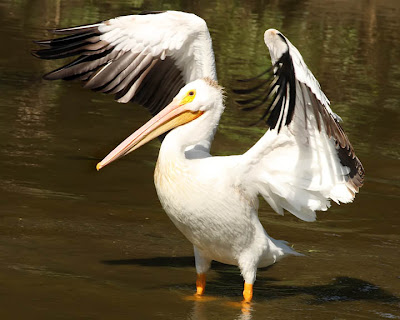 As I was about to cross the border into South Dakota, I came across the headwaters of the Minnesota River as it runs out of Big Stone Lake. There in the river I spotted about a half a dozen American white pelicans. 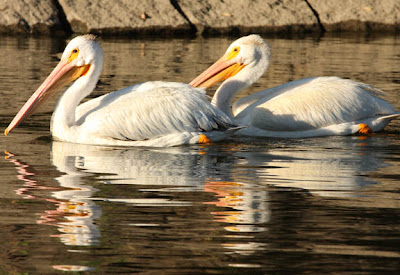 We do not see American white pelicans in most of Minnesota except during migration. They spend their summers on interior lakes in the north central and western portions of North America. This would include areas from western Minnesota to northern California and up into Canada. 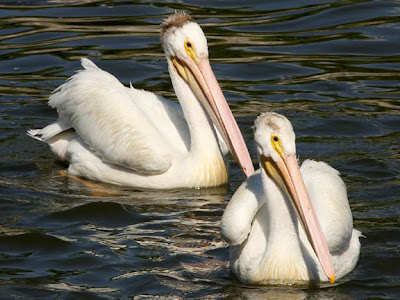 White pelicans eat mainly fish. They catch their prey by dipping their head under water and scooping fish up with the pouch that is connected to the lower mandible of their bill. This pouch can stretch about six inches allowing it to expand to hold approximately 3 gallons of water and fish. 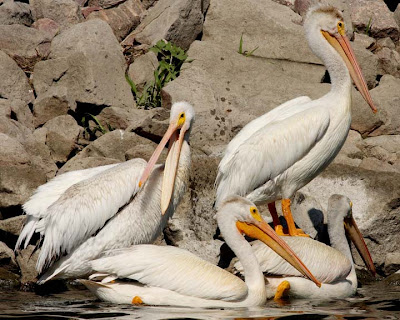 White pelicans are fairly social birds. They are often found hunting together in small groups. These hunting groups will swim in a circle gathering the fish together and then will all dip their bills to scoop up the fish at the same time. American white pelicans nest in large colonies with the nests located on the ground. When they migrate south for the winter, to Southern California, Texas, Louisiana, Florida, Mexico and Central America, the pelicans will also travel in large flocks, most often flying in a V formation. 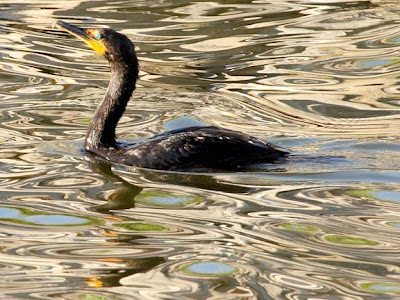 Another bird that was mixed in with the pelicans was a double-crested cormorant. Although they spend a lot of time in the water, or under the water diving for fish, the cormorants feathers are not waterproof like those of other waterfowl. That is why you often see cormorants standing with their wings stretched out, typically exposed to the sun. They actually need to do this to dry their feathers so that they can fly.
Posted by Ecobirder at 10:19 PM

Well, you changed this, I see.

Do you know there is a meme about Watery Wednesday? This would have been great on it. I am a fine one to talk, I haven't been doing it either.

You are not going to believe this, but I have Double Crested Cormorant posting on Thursday, and then later in the day an American Anhinga.

I love the White Pelicans, have always like the Brown Pelicans, but the white are awesome. Never seen one up close. Just mainly seen them on your blog. Thanks for sharing.

You surely bagged a heap on that little expedition. Did you notice the pelican in your first picture getting into the Halloeen spirit and saying boo?