Last weekend was sure a mixed bag as far as weather goes but then again what can you expect in Minnesota. Saturday was a beautiful day with a lot of sun and temps up to the mid 60s, which is pretty good for Minnesota in late October. The next day it was cloudy, with gusty winds, and we got our first snow of the season in the southern part of the state. The snow did not stay, fortunately the ground is still too warm but it is a good indication that winter will be here soon. Since the nights have gotten colder there have been a lot less insects around for me to photograph. Most the butterflies have been gone for a while, except for an occasional sulfur or cabbage white. A still see a few dragons around, at least on warmer days. They are mostly Autumn meadowhawks with an occasional darner still buzzing around. 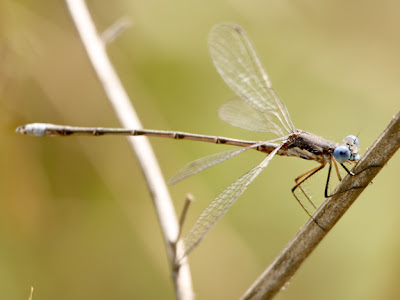 However back on September 1st there were quite a few dragonflies and even some damselflies like the spreadwing above at the ponds at the Carpenter Nature Center. Unlike dragons most damselflies keep their wing together when they land. The exception to this are the spreadwings. 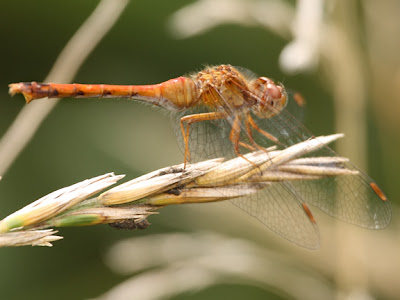 Autumn meadowhawks are easy to identify. They are the only type of the meadowhawks that have yellow legs. They were formally called yellow-legged meadowhawks. 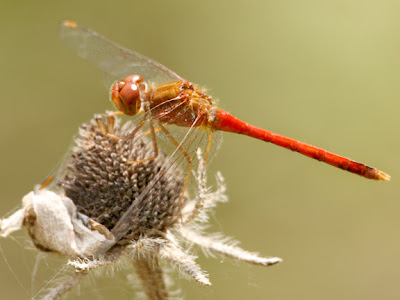 Autumn meadowhawk are a late season dragon. We do not usually see them until the beginning of August and they are around into the beginning of November, unless we get really cold temps. According to Kurt Mead's book, Dragonflies of the North Woods, they can still fly and feed at temps slightly below 50 degrees Fahrenheit. Most of the dragons that I am still seeing in late October are Autumn meadowhawks. 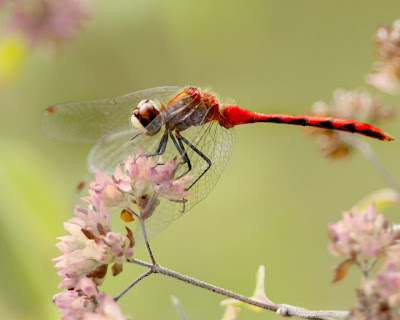 This next dragon is most likely a white-faced meadowhawk. I have included more pictures then usual but that was because I liked posting the same type perched on different plants. 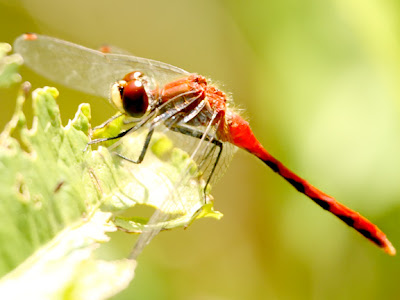 Most of the red meadowhawks, other then the Autumn are much more difficult to distinguish between, this includes the white-faced, cherry-faced, and ruby meadowhawk in my part of the world. This one would appear to be a white-faced, because of the pearly white face but usually the only true way to tell is in hand under a magnifying lens. 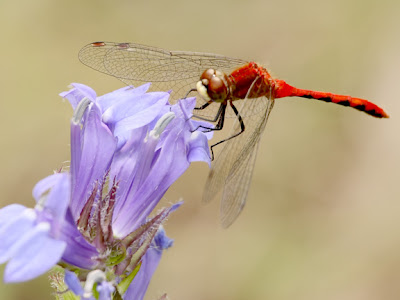 It is so difficult to tell the difference between these 3 types of meadowhawks that often the dragons themselves are confused. Often a white-faced male may fly in tandem with a cherry-faced or ruby meadowhawk female. It is highly unlikely that they will mate, because the reproductive parts are different for each type. 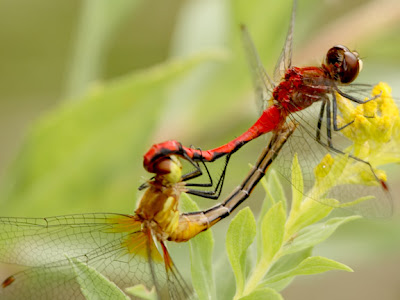 You can tell that these two are the same type because they are in the wheel position. When two different types come together they may fly in tandem but it is rare that they will go into a wheel formation like this because of the incompatibility of the reproductive parts between the different types. This male, red, and female, yellow, are in the midst of mating. Soon they will divide and the female will lay eggs in the water or mud near vegetation on the shore line. The eggs will not hatch until the following spring. While the female lays eggs the male will usually hover guard to keep other males away from her until she is finished.
Posted by Ecobirder at 4:27 PM

I got some photos today of Damsel, I think. I am in Fla right now. The large dragonflies I saw would never stop moving, so I did not capture them. Don't know if they will be good enough to post. As I was wandering around behind them I was envious of your great photographs you get of them all the time. Like the ones here.

The first one looks just like an elfin ballerina I know. Just beautiful.

Great pics! Especially the dragonfly mating one. I'm in Fla too and there are lots of dragons behind our business and around our retention pond. I'll have to snag my hubby's camera and see if I can capture them.