At the beginning of August I traveled to South Dakota for a few days to participate in a shorebird workshop. The conditions for shorebirds was not as good as I had hoped, rain the week before made the water level of many of the locations that are usually considered prime shorebird spots to high, but we found a few good spots where we had 20 to 50 birds that we could get real good looks at. This was very helpful for the workshop, since it gave us enough birds to look at and compare but not so many that it would be difficult to find a particular bird in a crowd. 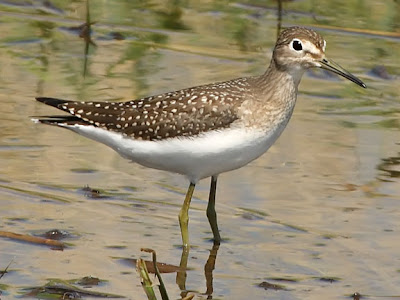 One of the birds that we saw in several locations was the solitary sandpiper. The distinguishing marks of the solitary sandpiper are the bold eye ring and the dark shoulder. These marking help to distinguish it from the similar looking lesser yellowlegs, which is only slightly larger but does not have the eye ring or dark shoulder. Both markings are very visible in the photos. 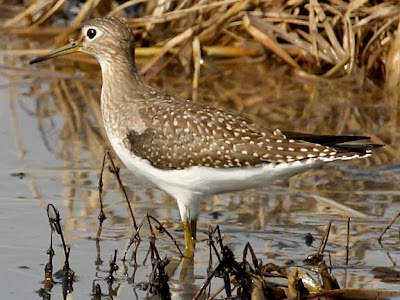 Another thing that you can frequently us distinguish a solitary sandpiper from similar shorebirds is to look at the habitat in which you find the bird. Solitary sandpipers are one of the few shorebirds that do not mind having vegetation in the mud around them, most other shorebirds look for mud that is clear of any and clutter. 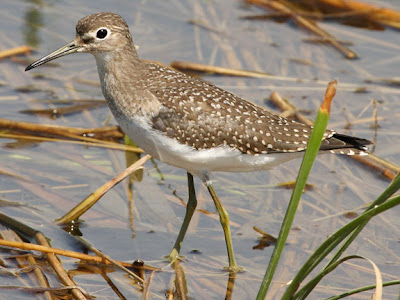 Because it does not mind vegetation solitary sandpipers are often found wading in the shallows of small ponds while they migrate between summer breeding grounds in Canada and wintering grounds in Mexico, Central and South America. Unlike other shorebirds the solitary sandpipers do not migrate in large flocks like other shorebirds, which is perhaps why they are called solitary. 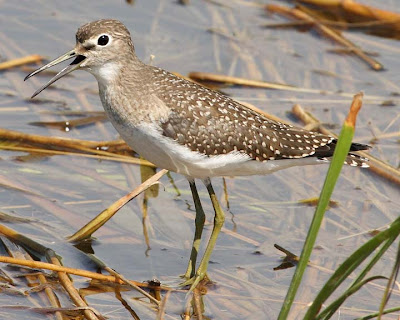 Solitary sandpipers are the only type of sandpiper in the Americas, and one of only two world wide, that nests in trees. They use the abandon nests of song birds such as robins, jays, waxwings and kingbirds.
Posted by Ecobirder at 8:28 PM