This weekend looks like it is going to be nice again so I am contemplating another trip up to Hawk Ridge and the Duluth area. With only a couple of weekends left in October, this might be my last chance to visit hawk Ridge during migration and have a chance for descent weather. So far I have made two trips up this year and have always managed to be there when the winds are not coming from the optimal direction. The hawk viewing is best when the wind is coming from the west, which pushes the birds towards the lake, and the forecast is predicting southwest winds for tomorrow. However it might be quite gusty, 10 to 20 mph, which may effect the migration. 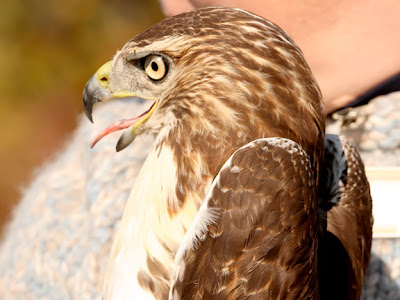 On my last trip up, October 4th, it was a beautiful day with lots of sun and cloudless blue skies. Unfortunately the wind was not blowing the right way and we did not get as many birds flying over as I hoped. Over at the banding stations they were a bit busier then on my first trip up and so the highlight of the day were the birds that were adopted and released. Like this red-tailed hawk. 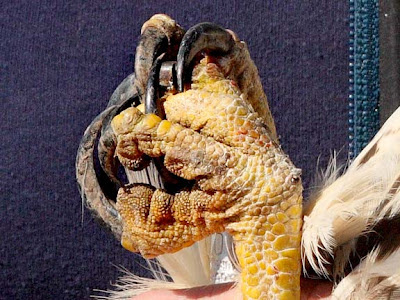 It was evident by the talons that this bird was pretty old and experienced. The scales on the talons of most raptors are pretty thick and tough. This helps the raptor to avoid injury from prey, which often has sharp teeth and claws, that it captures in its talons. This birds talons were gnarled and scared indicating that it has had a lot of experience capturing prey. 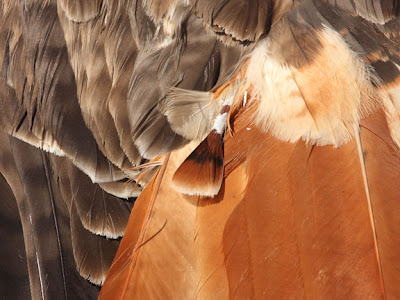 Another interesting fact about this particular red-tail was that it had a new tail feather molting in. Most raptors will only molt their flight and tail feathers one time per year. Unlike some other birds, like many types of ducks, they molt these feathers one at a time so that they can continue to fly and hunt. If they lose a feather at any time they will not replace that feather until it is time for it to molt. If this bird was to lose that new feather at this stage it would not be replaced until about this time next year, so this bird was handled with care. 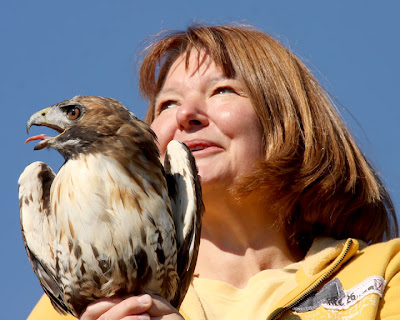 Raptor adoption is one of the main ways that Hawk Ridge raises money to help pay for all of the programs and other work that they do. Unlike many other adoption programs, such as the ones that we have at The Raptor Center, when you adopt a bird at Hawk Ridge you are the only person who adopts the bird. You are not required to be present at Hawk Ridge to adopt a bird, if you would like to adopt one check out their website, but if you are at the ridge you get the special privilege of releasing your bird. 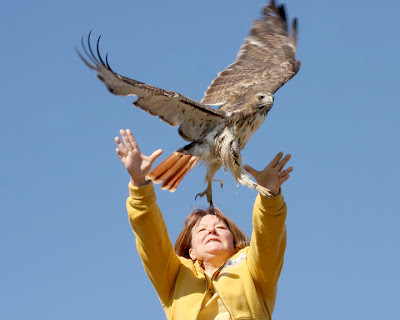 This was just one of four red-tails that were adopted that day. Red-tails are fairly common so the price to adopt one is only $30. I do not know many people who would not be willing to pay $30 to help a good cause and at the same time get to hold and release a beautiful bird like this red-tail. As you can see from the look on the adopter's face it is a special experience and one that you will remember and cherish for a long long time.
Posted by Ecobirder at 4:52 PM

Look at that tongue and CLAWS!!!

Her look says it all. Think that would be so great. And cheaper than a theme park (which I do not go to!)