Well I guess that I do not feel so bad now. I thought that this spring I was doing much better at identifying warblers but then I found this bird and it kind of threw me for a loop. 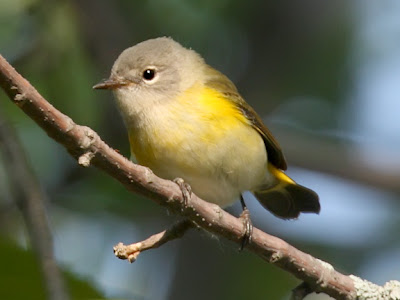 But this bird does not quite seem to fit any type exactly. So far we have it narrowed down to probably a Nashville, Orange-crowned, or female redstart. Here are a couple more pictures that might help. 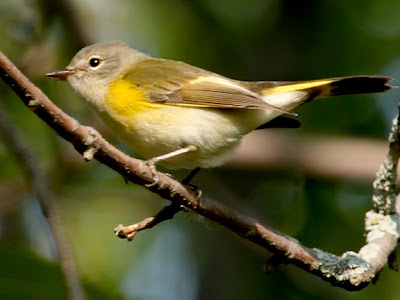 The last photo sure does look like a female redstart but the breast sure has a lot more yellow then other female redstarts that I have seen. It also looks too yellow to be a orange-crowned warbler but the last picture also shows a broken eye ring and first picture shows a white throat. It looks more like the color of a Nashville but the eye ring and throat color don't appear to be correct for a Nashville. Hopefully with these two pictures it will be easier to ID. If you have an opinion please post it in the comments.
For the record the picture was shot at Park Point in Duluth, MN on September 20th at around 9:30 AM. The bird flew to this branch and was in the light for only about a minute before it flew back into the cover of the trees.
Posted by Ecobirder at 6:33 PM

Much better views. The undertail coverts clinch it. It's an Am Redstart. The profile of the bird in these pics is also correct for Am Redstart.

Identifying birds from photographs is always difficult. I'd hesitate to identify any bird based on a few photographs. Especially ones that don't show me the entire bird. The type of film or time of day or angle to the subject can all influence the identification.

Yes--the tail clinches the fact that it's an American Redstart.

With the additional pictures I think that everyone pretty much agrees that it is a female American redstart, and with Laura's response, you can't get much more of an authority then Laura unless possibly David Sibley showed up, I think that we have a pretty good ID. Thanks to everyone that responded.

Hi,
Your blog is wonderful. I just have one more comment about the American Redstart - I think it's a juvenile male rather than a female, because of the color intensity.
Again - great pics and info. I always look forward to your posts.

Yes, it is great to have a simple caption for your calendar, but it might be interesting to actually acknowledge that the world of birding is a dynamic and sometimes confusing, yet wonderful world; that we don't always know the "name" of ever fabulous, beautiful bird we may see in the field? I think lots of birders would identify with that concept and non-birders would feel better, too. Just a thought.

I would be one of those birders happy to see a ‘pro’ not name a bird ‘for certain,’ at least once in awhile.

I have seen folks ask for help with a bird ID…a difficult bird; one of those ‘easy to confuse with another very similar bird’ kind. It amazes me when one will leave a note like: “It’s THIS particular bird”…as if the gawds themselves have spoken.

I like when folks, like here, make statements that support their guess and especially comments like the curmudgeonly_birder and bosque_bill made that ‘allow’ us to just guess and be happy with that. After all, it’s impossible to know for sure; age, sex, time of year are all markers we’ll never get from a photograph.

I agree with darcy, too…Ecobirder’s blog is wonderful…and also that she felt okay to offer her point of view and why.

Yes, I like it when folks discuss what they see, what their best guess is…and why. It helps folks like me learn more about birds, as well as how to look at them. Thanks, all you folks are great!!!

How did I miss this? She's beautiful.

It is a beautiful bird. Still don't know. I am sure if you can't figure it, I sure can't.