Clubbing with the Dragons at Carpenter

Today was another beautiful day weather wise here is southeastern Minnesota. All of meteorologist had been predicting nice weather through out the week so I decided to take a half day off of work so that I could get out and enjoy it. My plan was to head over to Carpenter Nature Center to do some birding and check out the Friday banding. Unfortunately work held me up a lot longer then planned so by the time that I got to Carpenter the banding was pretty much over. Even more disappointing was that I found out they had also released an eagle at the nature center that morning which I had also missed. Disappointed, but nice weather helped to make things better, I did a little birding around the park. I photographed a lot of fall and winter species, which I guess may be an omen that winter will be here soon. But with lots of sun and temps in the mid sixties it did not feel like winter or even late fall yet. In fact while I was out I spotted a sulfur butterfly as well as numerous meadowhawk dragonfly. 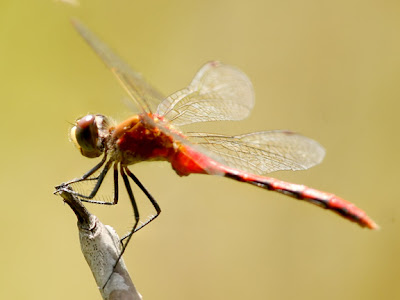 Back on August 17th I was photographing dragonflies at Carpenter also but at that time of year there was a little bit mire variety. Like the meadowhawk above, which if I had to guess I would say it is a white-faced male. 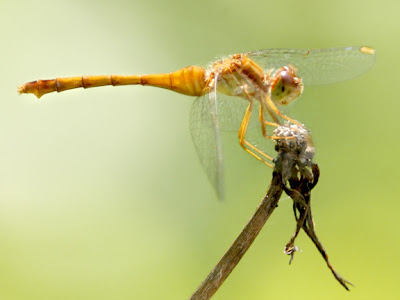 This was about the beginning of the time when I started to see Autumn meadowhawks. The females, like the one above, are yellow and fit the male Autumn meadowhawk very well. The males are red, like many other types of meadowhawks, but are distinguishable because of the yellow legs that both male and female have. 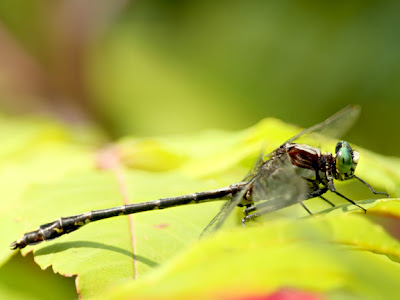 As I was getting more interested in dragonflies over the summer I began to spend more time at Carpenter. Through research I found out that there were a number of uncommon and rare dragons that tended to live around the St Croix River and its tributaries. Since Carpenter is located on the St Croix I figured that it would be a good place to look for these more unusual dragons. I never did find any of the really rare ones that I was looking for, I will have to start looking earlier next year, but I did find a couple of interesting dragons that I had not photographed before, like this black-shouldered spinyleg. The black-shouldered spinylegs is in the clubtail family. This would be a male because the abdomen is fairly wide or clubbed at the tip. Females show little to no clubbing at the tip of the abdomen.
Posted by Ecobirder at 6:36 PM

What a disappointment to miss the Eagle release. I would love to be there sometime when one is released.