There is Gold at that there Purgatory Creek

The last weekend in July brought some nice weather so I decided to head back over to Purgatory Creek Park and continue my explorations there. The first time that I visited the park I did not have a lot of time so I only went around the wetlands to the path that lead to the blind. This time though I decided to follow the path all the way around the wetlands until I came back to the parking area where I began. The back side of the wetlands was a lot more wooded. That is where I found a very colorful male American goldfinch flitting among the trees at the edge of the marsh. 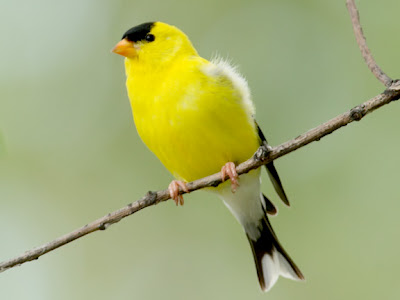 The American goldfinch actually goes through two molts per year. The first is in the spring when the males molt into their bright breeding plumage, like the bird in the photos. Later in the fall the bird will molt again into its much more drab winter colors. 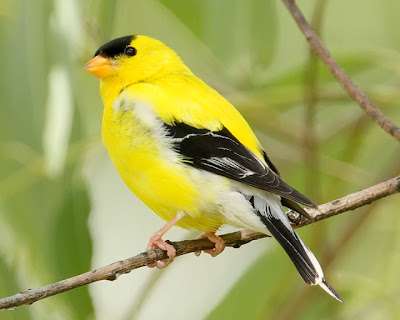 Goldfinch nest later then most other passerines do. They do not begin their mating season until late June or early July. Some females that mate early enough in the season may leave the male to take care of the fledglings while she finds a second male to mate with and begin another brood. 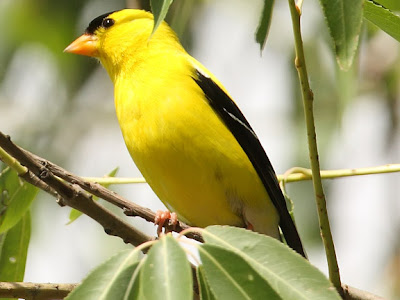 Goldfinch are often seen feeding in groups, smaller groups in the summer and large flocks during the winter. They are primarily seed eaters and in my experience they have a fondness for thistle. I have fortunate to have had several opportunities over the past couple of years to photograph them while they eat wild thistle seeds. It is fascinating watching them remove the seed from the pod. Each seed has several silky threads attached to it to help it to propagate and spread by floating through the air. The goldfinch use these threads to pull the seed out of the seed pod and then eat the seed leaving the silky threads behind. Often these threads find a hold in the birds beak or feathers giving them a comical look as they continue to dig more seeds out. Unfortunately I did not see any thistle around at Purgatory Creek so I had to be satisfied with pictures in a tree.
Posted by Ecobirder at 9:34 PM

I'm amazed at their beautiful yellow colors - I don't think any of my goldfinches looked like this this summer.

Gosh, our goldfinches have already lost most of their color. This one is beautiful.

Such wonderful photographs, I couldn't get close enough to get the Goldfinch all summer. They are such skittish birds.