Another new location that I began to explore this summer was Maplewood Nature Center. While looking up info about dragonflies on the web I came across the website for the Minnesota Odonata Survey Project. They have several events through out the summer including a workshop that was going to be held at the Maplewood Nature Center on the 23rd of August. I was interested in class and so I decided to go check out the park on the last day of July. 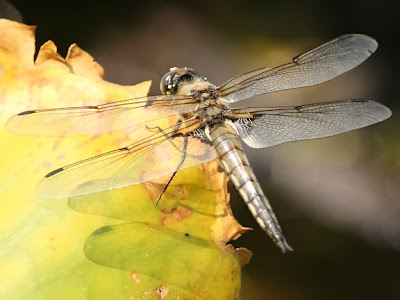 The best parts of the park for me is the board walk that runs across the lake and a small meadow on the southern end of the park. From the boardwalk you can get a great view of a small, tree covered, island that was home to many birds through out the summer. In late July the pond was filled with lilly pads, which made great perches for four-spotted skimmers to hunt from. 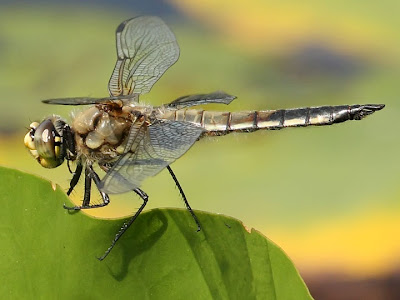 The four spotted skimmer gets its name from the black stigma and nodal spot on each wing, the second photo gives you the best view of these spots. All dragons have a stigma and nodal spot on each of their wings but the nodal spot, the spot on the middle of the front edge of each wing where the veins come together, is not very visible on most dragons other then the four-spot. Four- spotted skimmers can be found in North America, Europe, North Africa, Japan, and back in July they could be found at the Maplewood Nature Center.
Posted by Ecobirder at 10:08 PM

You must have good eyesight and quick reflexes to capture them to such perfection.

Beautiful photos. In the Smoky Mtns National Park dogs are not allowed on the trails. Doesn't keep them from taking them though. Last spring I was photographing several deer, until a dog barked in the distance. All the deer were gone in a flash.