This summer I had a lot of opportunity to go out and photograph nature. As a result I have been able to post every single day for over four months, the last day that I did not make a post was June 4th. Before I began my blog I used to read other blogs, some about nature and others about different subjects such as politics, and one thing that kept bringing me back to certain sites was the fact that they updated every day, or at least on a very regular basis. As I began blogging, and figuring out what I was doing, I made a goal to try and get to the point where I could post every day so that my readers would always have something new to read and look at each day. I have succeeded over most of the summer and I hope to continue through the fall and even through winter. Winter is a hard time to get nature pics in Minnesota but there will be some opportunities and I have put away some photos that I did not post, so that I will have some fun stuff to share during the winter also. 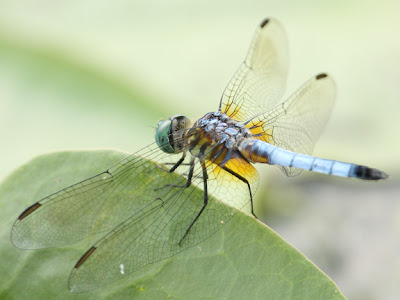 I still also have quite a back log of posts that will probably last me through most of the rest of 2008. Like these dragonfly pics that I took back in July at Fort Snelling State Park. 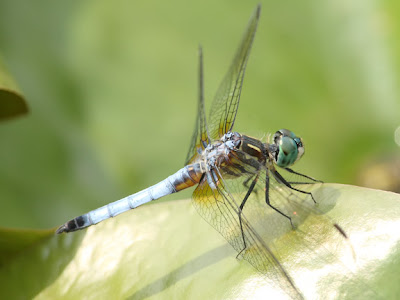 The blue dasher hunts by making short flights, from a favorite perch, in serch of prey. Both the male, pictured above and the female, which is black and yellow striped, will defend a favorite perch from invading dragons. 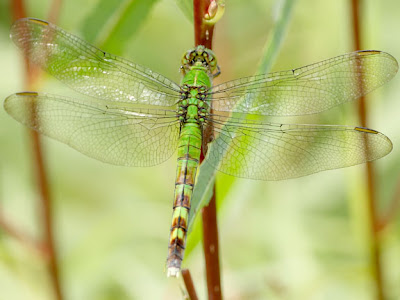 I was pretty excited to get a photo of the photo of the dragon above. I have photographed several male eastern pondhawks before but this was the first female that I ever captured. The males are primarily green also but most of their thorax and abdomen is covered in in a slate blue pruinose. 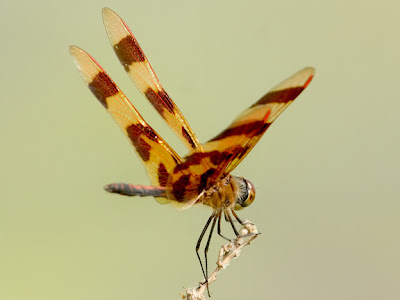 There were also some more Halloween pennants around. Unlike the ones that I found at Purgatory Creek these where the orange color which most likely mean males. 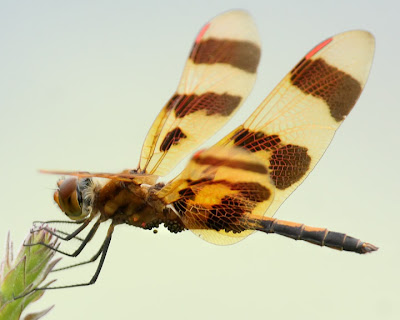 When I saw this pennant through my lens finder the first thought that came to my mind was that it was laying eggs. That idea quickly dissappeared though because it was up in the air, it is probably a male, and eggs are laid from the end of the abdomen. The tiny dots that you can see in the photo are actually water mites. Water mite larva often attach to dragon fly larva and feed on its bodily fluid. The Mites, realatives of the wood tick, continue feeding on the dragonfly as it transforms into an adult. Eventually the water mite larva will drop off of the dragonfly and molt into its nymph form. As long as there are not too many mites the dragonfly can live as a host to these tiny parasites.
Posted by Ecobirder at 10:00 PM

I like the touch of yellow or gold on the first 2 photos. The Halloween Pentant is pretty awesome, bet the other dragonflies are jealous of him.

That pondhawk is very beautiful! I get so excited now when I see dragonflies I can identify on your posts now (because I learned from your previous posts.) I knew immediately that was your Halloween Pendant. Thanks for expanding my mind.

Wonderful captures - I don't know much aout dragonflies, but they are lovely.