I have decided to make a slight change in how I do things here at Ecobirder. Since I began I have tried to post things in chronological order but with the abundance of material that I currently have to share I have decided to mix things up a bit. I am hoping that by mixing up my content it will make things more interesting for you my readers. So let's begin with some butterflies that I photographed at Purgatory Creek on July 23rd. 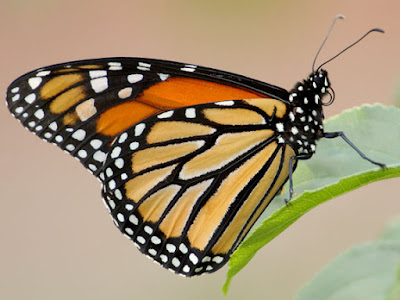 The monarch butterfly is probably the most recognized butterfly in the world. Monarchs are found through out much of North and South America as well as New Zealand, Australia, and some parts of Europe. Their bright orange wings are toxic to many predators, due to the milkweed that they eat as caterpillars and so they are usually not bothered. 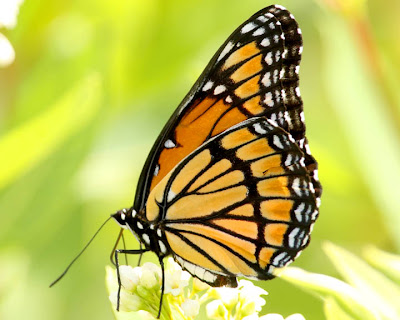 Do you notice something different about this monarch? See the black stripe running vertically down the wing? That stripe indicates that this is not really a monarch. Instead it a Viceroy. 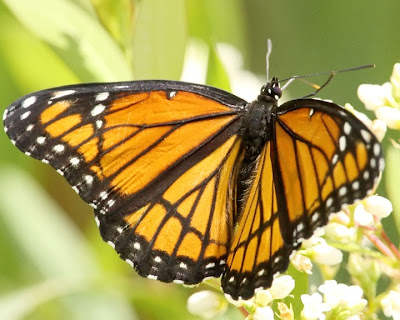 Viceroys may look like monarchs but they are pretty different. Both are in the family Nymphalidae, brushfoots, but the viceroy is in the Limenitidinae or admirals subfamily while the monarch is the the subfamily Danainae. The Danainae subfamily consists of the butterflies which eat milkweed while in their larval state. The viceroy larva does not eat milkweed, it eats the leaves of willows, aspen, apple, cherry and plum, so it is not toxic like the monarch. However due to its close resemblance it is often over looked by predators.
Posted by Ecobirder at 8:15 PM

Beautiful images - I'm sure I've mistaken the viceroy for the monarch many times!

I thought all the butterflies were gone from my yard except the Gulf Fritillary. To my surprise yesterday there was a Monarch again, had not seen one in 2 months. When I pulled in the driveway I saw what I thought were 2 Gulf Fritillary chasing each other. When I grabbed the camera and went to the zinnia blooms all I saw was a Monarch. A pleasant surprise.

Don't think I have ever seen a Viceroy, and would like to.