Yesterday it was a beautiful day so I decided to visit Wood Lake Nature Center after work. It is hard to believe that it is already October, especially with the weather as nice as it was yesterday. The sun was shinning, there was a pleasant breeze and the temp was in the upper 70s. Out in the open fields at Wood Lake there were still many dragonflies and butterflies flying around. Living in Minnesota all my life I remember many years in the past that we have had snow which stays on the ground in October. So it is pretty strange, and very cool, to still see insects flying around.

I got really lucky yesterday in that I managed to find a green darner male that had landed in the grass. Green darner are one of the big green dragonflies, some of them are bigger then humming birds, that you usually see zipping by. Green darners are very strong fliers so they spend a lot of their time in the air. When they do land they blend into the brush pretty well so that you usually do not see them until it is too late and they have taken off. But yesterday I spotted this green darner male as he was flying low over the grass and watched him until he landed. Then I crept slowly and carefully until I was close enough to get some great pics. Her he is in the grass. 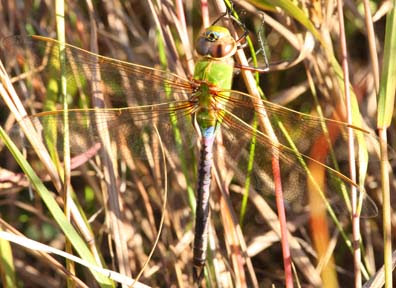 You can tell that he is a male because he has a blueish abdomen. Here is a close up of his face. 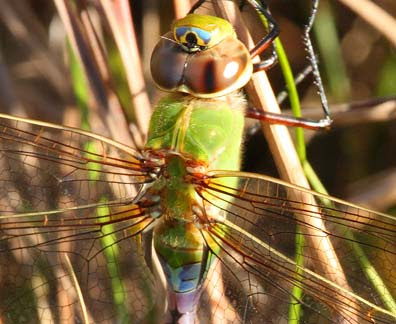 I also spotted a saddlebags in flight but unfortunately he did not land. I did also get some bird pics before I had to go to my meeting at the Raptor Center but I will have to share them with you later.
Posted by Ecobirder at 5:34 PM