On Saturday Michelle and I went down to Wabasha, MN for the grand opening of the National Eagle Center. There was a big celebration planned with events through out the city. Unfortunately the weather was not very cooperative. When we left home it was grey and cloudy but as we went south the rain began to pick up. When we arrived at Wabasha it was raining steadily. The main street was blocked off for a stage and the eco tent, so we had to park a couple blocks from the center and walk through the rain. As we walked through the rain we passed the stage where a poor musician played under an overhang to a bunch of empty rain soaked chairs. The center itself was packed. We arrived around noon so there were still a lot of sponsors and local politicians there for the dedication ceremony. Since we were already members we did not need to stop and buy tickets so we got our arm bands and went inside out of the rain. I was soaked so we went to the gift shop and bought a dry shirt and a hat for me to wear. Then we got in line for the tour.

The tour was broken down into three parts. The first part was in the eagle area. Angel and Columbia were in the eagle area as well as a couple of volunteers who answered questions about eagles. 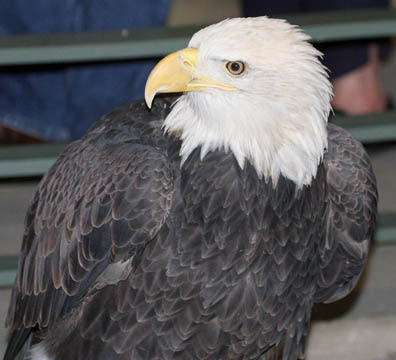 The second part of the tour was in the preparation area. A volunteer talked about food preparation, medical care, and how the eagles are transported. The final portion of the tour was in one of the class rooms. In here they had volunteers answering questions, media from the normal daily lectures and Harriet to pose for pictures. 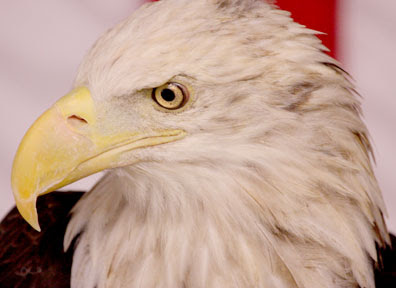 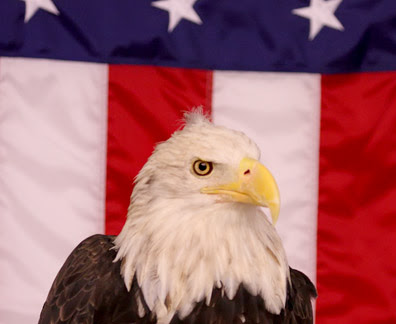 Harriet has appeared at VA hospitals, has here face on a special license plate, has appeared on the Steven Colbert Report and has been given her military wings. 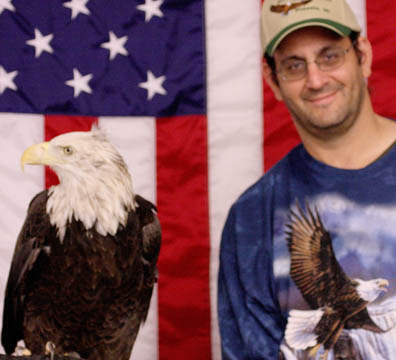 Harriet is the shorter one in the picture. The geeky guy next to her is me. Doesn't the new shirt look nice? It's too bad that Michelle has already told me that it belongs to her. Well at least I get to keep the hat. After we left the center we decided to check out the eco tent. It was filled with exhibits from The International Wolf Center, the Upper Mississippi River Wildlife and Fish Refuge, Michael Pappas with lots of baby turtles, The Raptor Center, and others. 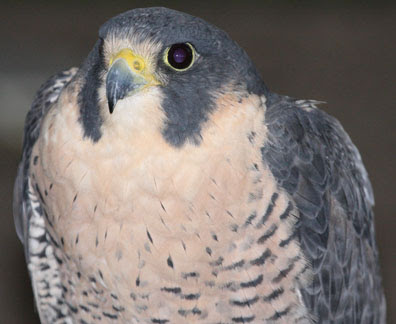 The Raptor Center brought a bald eagle and a peregrine falcon to the event.

Posted by Ecobirder at 5:30 PM