Lunch date with an eagle

Wednesday was another beautiful day. Unfortunately I could not go out and shoot after work because I have been helping out at the Raptor Center on Wednesdays after work. So I decided to run over to Lake Como over my lunch period and enjoy the weather rather then eat in front of my PC like I typically do. I started out by shooting some house sparrows that were foraging in the grass around the lake. 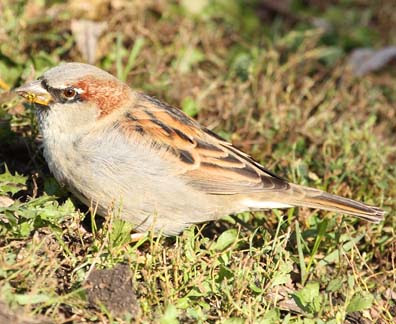 Then I moved to the lake where I was trying to get some shots of a few American coots. Unfortunately the coots were right in front of the sun making it very difficult to get any thing more then a silhouette. While I was waiting for the coots to move to a better angle I saw a large figure fly in low over the road and turn towards the gulf course. A tree was partially blocking y view but it looked like it was a bald eagle. It went low on to the golf course where I lost sight of it but since I did not see it fly back out I figured that it may still be close.

I left the coots and headed across the street to the golf course. There was a large group of Canadian geese, with a few mallards mixed in, making noise at a water hazard near to the road. I looked up and there was the eagle. I moved to the other side of the tree and got a couple of shots. 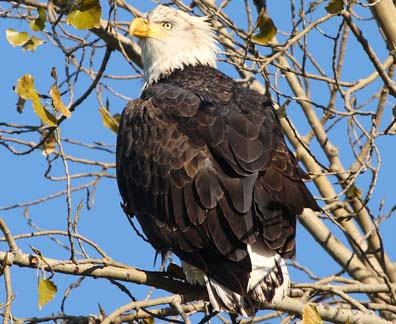 After a while the eagle got bored or annoyed by all of the geese below and he flew off across the golf course. While I was there I took a couple of shots of the male mallards, their heads almost glowing in the bright sunlight. 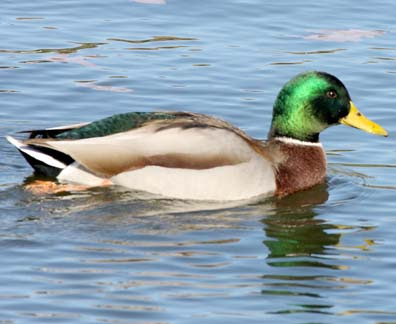 I did not get much of a chance to eat during lunch that day but it was by far the best lunch time that I have had at work in a while.
Posted by Ecobirder at 6:05 PM