It's been cloudy and rainy here for 4 days now. Saturday after we got home from the grand opening of the National Eagle Center I stayed home since the weather was so poor. Sunday was even worse then Saturday with some heavy down pours.
Monday the rain stopped but the cloudy grey skies continued. I had forgotten to mail in my registration for the Audubon Upper Midwest Regional Conference and Monday was the registration deadline so I went to the Minnesota Audubon in Woodbury, MN, after work, to drop off my paperwork. Woodbury is a developing suburb on the south east side of St Paul and is close to home. On my way back I was surprised to see a pheasant on the side of the road in the middle of the suburbs. 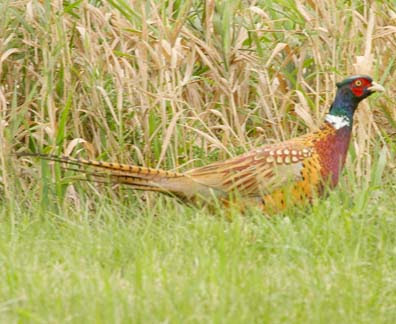 Since the weather report had said that we would have partly cloudy skies I had my camera with me so that I could go shooting after work. So I got out and got a couple of pictures. He would have been so much brighter if it had not been such a drab day. 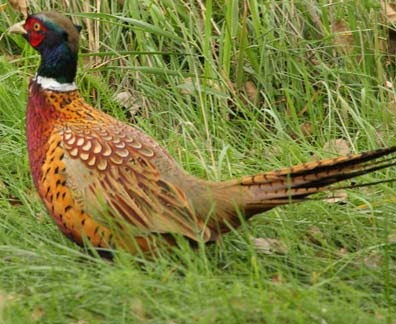 Today the rain returned but I was not too depressed because I have to work my part time job Tuesday night so I could not go out and shoot anyway. Tomorrow is supposed to be nice I hope that they are right this time.

Posted by Ecobirder at 9:30 PM