My first assignment on the transport crew at The Raptor Center

Last Wednesday I got my first assignment as part of the transport crew for the Raptor Center. Michelle and I have been long time supporters of the Raptor Center. We have participated in their open houses and raptor releases and donated a pretty good sum of money to help with their cause. After rescuing the eagle from Crex Meadows in August I wanted to get more personally involved, so I looked into how I could volunteer with my current work schedule.

After some research I figured that the transport crew might work with my schedule so I contact their volunteer coordinator Vivian who gave me information on the next training session. So I went to the training session to get more info and ended up leaving as a member of the Wednesday transport crew. I spent the next few days getting my cages cleaned, we bought a medium animal carrier for the eagle and I had a small one from back when I had rabbits for my act, buying some gloves, filling out paperwork and getting a tetanus shot.
When the Raptor Center receives a call from someone reporting an injured bird they call a member of the transport crew to go pick up the bird and bring it in to the center. The transport crew also sometimes transports raptors to or from the airport. Crew members are on call for four hours shifts. Since I wanted to be a bit more involved then sitting and waiting for a call at home I have been helping out in the lobby on Wednesday afternoons. Last Wednesday at around 4:30pm I overheard Alana , the vet working that evening, talking to Emma, who works up front, about an injured bird that needed to be picked up. I asked Emma about it and since the bird was in Eagan, which is near where I live, I volunteered to go make the pick up.
I called Justin, the person who had the bird, and arranged to meet him at the Eagan Best Buy. I arrived 45 minutes later, the rush hour traffic was pretty bad, and found Justin waiting with a small box in hand. I peaked in, to make sure it was a raptor, and saw an American kestrel staring back. I thanked Justin and gave him the information packet that we give to people who assist us in rescuing injured raptors and then I took the bird to my vehicle. I though about leaving the bird in the box that Justin had it in, the less they are handled the better it is for the bird, but the top of the box did not seem very secure and I did not want to chance the bird getting loose while I was driving so I transferred it to my small cage. When I first saw the bird in the box I believed it was a female, I only got a quick view of the chest and the face, but when I took him out of the box and moved him to the cage it was obvious that he was a male. He was pretty feisty when I moved him which is a good sign. Justin had said that he had found him on the ground by railroad tracks.
About 45 minutes later I had the kestrel back to the Raptor Center and Alana was doing an initial investigation. I stuck around for a short while but did not want to get in the way so I left knowing that the bird was in great hands. Since my main concern was to get the bird back to the Raptor Center quickly and safely I did not get any pictures however if you are not familiar with the American kestrel here is a picture of a male kestrel that I shot earlier this year at the Sax Zim Bogs. 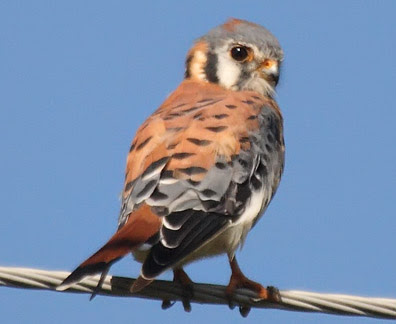 Posted by Ecobirder at 8:20 PM