Welcome to Skywatch Friday, or Skywatch Thursday here in the Central Time Zone of North America. In my opinion there are few things that are more wondrous then a clear blue sky during the late Autumn here in the part of the world that I live in, but this past weekend I did find something even more wondrous. 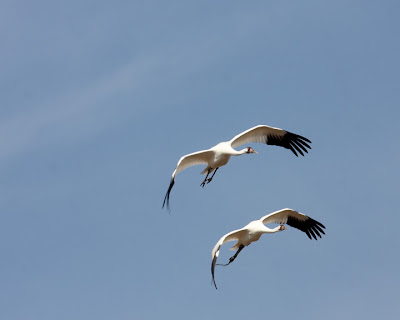 A clear blue sky during the late Autumn with a pair of endangered whooping cranes flying across. I spent a day out at Necedah National Wildlife Refuge this weekend and was rewarded with a flyby from a pair of these magnificent birds. In 1941 there were only 16 whoopers left in the world since that time, with the help of a captive breeding program at the Necedah NWR, their population has increased approximately 5% per year so that there are now around 500 birds with about half of those in captivity.
Posted by Ecobirder at 2:40 PM

Awesome! While I've seen Whopping Cranes - never saw wild ones - and you even captured them in flight.
Congratulations and thank you for sharing!
Cheers, Klaus

So graceful. Great shot. Thanks for sharing!

Amazing photo! Whooping Cranes are on my wish list.

Perfect catch for Skywatch Friday!!!! Mine's up too hope too see you around.. Have a great weekend!

Magnificent birds I wish we had here and such an awesome image.

Beautiful. Quite an impressive capture. Thank you for sharing it with us!!

OH MY! Spectacular shot! Whooping cranes in flight is very hard to get and apparently you have made it look so easy... these are beautiful!! =)
~Michele~
Mountain Retreat-Canada

They are going to assist those cranes migrate to Florida today using the light aircraft.
Happy SW Friday!.

This is beautiful....The best skies have birds flying in them!

What an incredible photograph! An absolutely stunning shot. I've seen cranes in Northern Europe, but these are just WOW!

Fantastic shot! Lucky guy to be near Necedah!

Great shot of an awesome bird! Good birding to you!

What a special moment. With so few in the wild it must be a rare occurrence. We have herons here both at the harbour and up the lake near our cabin. I invite you to come see my sky views from the BC Ferry to Powell River. -- Margy

Never seen them, thanks for sharing. Great for Sky Watch.

Hate to admit it, I have pulled you into Sky Watch, and now I have jumped ship. So, so busy. I am sure I will return to Sky Watch in a few weeks, but am going to take a break for now.

Oh, what a wonderful shot! Good for you to capture these rare birds! Happy SkyWatching! Greetings from Iowa.