On my way back from Whitewater State Park on Sunday I decided to take the scenic route and follow the Mississippi River north back up to the Twin Cities. This is a route that I know well as I have spent a lot of time over the past ten years or so photographing the eagles along the river during the winter time. 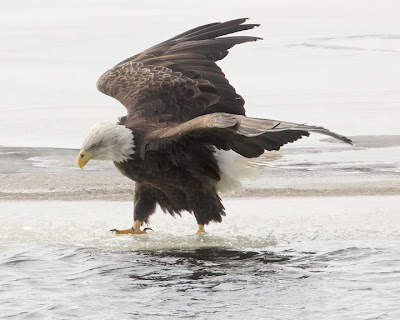 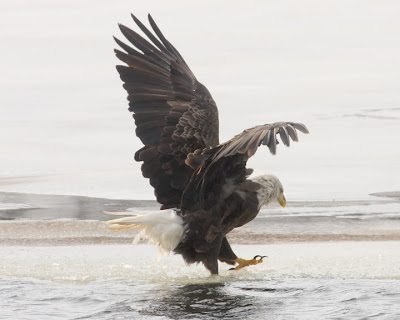 I still love to photograph eagles and even though I do not go down to the river as much as I used to the eagles are still one of the best wildlife subjects to photograph in southern Minnesota during the winter. So I stopped at the best locations to spot eagles, Reeds Landing and Colville Park in Red Wing, and as with other trips this year I spotted eagles but not nearly as many as I have seen in past years. 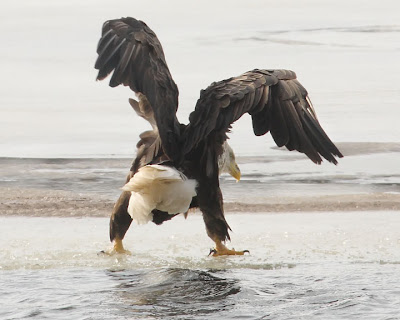 I am wondering if the harsh winter has pushed them further south this year. Most of the other years that I have been photographing them the weather has been milder, which probably made food more plentiful. If food becomes scarce the eagles will continue to move south until they find a place where they can find sufficient food. It will be interesting to see how many show up when they begin migrating back north again. These pictures where taken back on December 13th, 2008. They were taken at Alma, WI, where around approximately 20 eagles gathered around opening in the ice in the river below the lock and dam at that time.

Posted by Ecobirder at 8:40 PM

We agree, hopefully there will be plenty coming back during migration, would love to see them in larger numbers. We'll have to try Coville Park again soon.

By the way, great photos.

Oh - my - GOODNESS! These have got to be some of the most amazing photos I've ever seen of an eagle. What I think I like most is that the way they're photographed, it looks six feet tall. Wonderful action shots right on the edge of the water. Awwwww-sum!

Awesome, awesome, awesome!!! Great angles on this beautiful subject. You give them personality. Eagles are magnificent and I thank you for sharing these incredible photos.

Perfect captures, pretty rare seeing an eagle tiptoeing through water. Thanks for sharing.

Wish if they were going to come on south they would come east too! Would love to see some.

These are great and unusual shots,Looks like it is walking on water. Helen

I really like that you have shown the eagles stomping through the puddles! A part of their life I have never seen before!
Thanks for sharing!

You have captured these eagles beautifully. I love all of your photography.

These are great photos of the eagle! Very funny as well! Dancing on Ice?