Spent the day hanging around the house. We are under a winter storm warning until 6pm CST, it began last night but so far we have not seen any snow where I live. That is the good news, we have already had plenty of snow so far this winter so I am hoping that it misses us all together this time, the bad news is that it had foggy all day so it has not been really good weather for going out and taking pics. Yesterday we had some clear skies so I was back out at Prescott, WI, after work, trying to get some harlequin pics but he is still being uncooperative and sticking to the opposite side of the river. 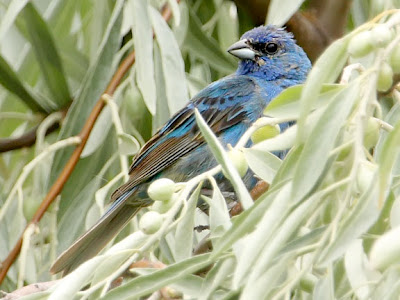 So here are some more of my back log of pics from the summer. These pics where taken at purgatory creek back on August 11th. I was pleasantly surprised to find an indigo bunting on this outing. Michelle really likes indigo bunting, I think that it is because of the way they kind of shimmer between black and blue depending on the light. I like them too but I would prefer a painted bunting, which would be a lifer for me. I will need to travel south though to see one of those. 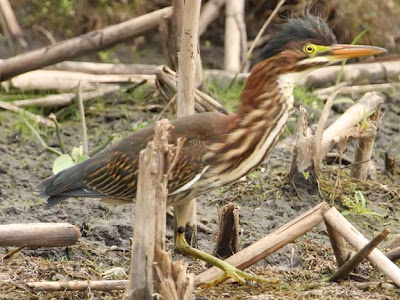 I love when green herons have their crests sticking up, it makes them look like they have a mohawk. A bird with a mohawk sounds like a perfect fit for a place called purgatory creek. The funny thing is that Purgatory Creek is located in a pretty affluent suburb of Mlps. I am guessing that the creek got its name before the burb grew up around it. 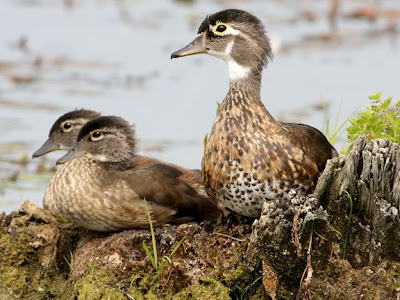 A several occasions, during the summer, I got the opportunity to photograph a female wood duck who was raising a family in the wetlands that surround the creek. 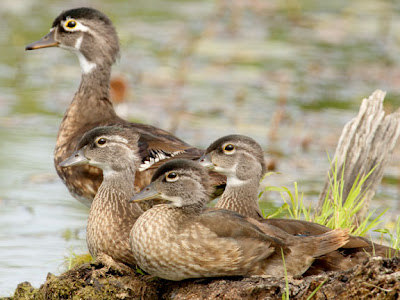 The male wood duck is the perfect example of the deadbeat dad. He is around for all of the fun and games but when it comes time to incubate the eggs, or raise the chicks he is gone. He is off somewhere with the rest of the guys probably bowling or playing poker. Actually since this is in Eden Prairie he might be hanging out at the golf course.
Posted by Ecobirder at 5:04 PM

very special . I loved it .. must remember to come back often Sandy

these are great i love the last one

Great photos..I love the one of the female wood duck and her chicks!
And the Indigo bunting is one of my favorites to..I hear you about the painted bunting...I have seen them but fleeting glimpes...would love to get a good long looky...

I'm a fanatic about your wood ducks! Loved seeing this family! Had to laugh about the dad! The Common Loon father has to be one of the best water fowl dads.

Beautiful duck family! and the Indigo and heron are great too!