Sandrock Cliff on the St Croix

Photographing nature can be very unpredictable. Most of the time when I go out I have an idea of where I want to go and what I expect to see but sometimes mother nature throws you a bit of a curve. Back in August (8-16) I made a trip up to Crex Meadows. It was high summer so there was not a lot to photograph so I decided to take a bit of a side trip. 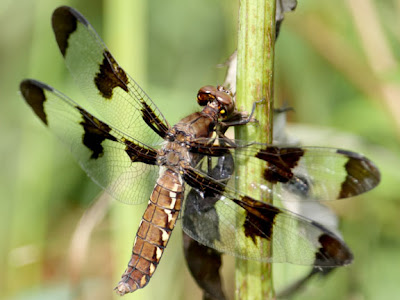 As you cross the St Croix River, on the way to Crex, there are signs for the Sandrock Cliff Campground. Since the campground is on the St Croix River I decided to go and check it out. I was hoping to find one of the rare clubtail type dragonflies that are typically only found around the St Croix River and its tributaries. As soon as I started down a trail leading to the river I found a dragon but unfortunately it was just a female common whitetail. 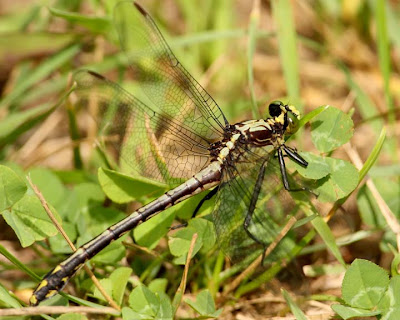 Undaunted I pressed on until I came across a clubtail dragon. I was pretty excited, as I was able to get in close enough to get some good shots. I identified it as a black-shouldered snipeylegs, which is a fairly common clubtail. 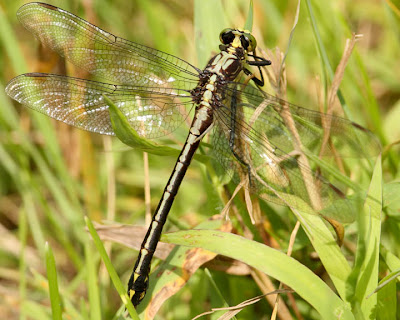 You can tell that it is a black-shouldered spineylegs by the numerous spines on the hind legs, which are clearly visible on the first pic. The spines are used by the dragon to catch and hold its prey. Encouraged by adding a new dragon to my life list I pressed on down the path in search of a rare clubtail. 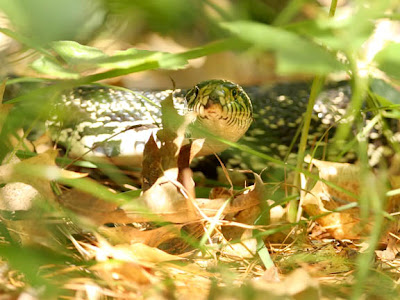 And that is when I got a big surprise. As I walked down the path I heard a loud hissing coming from in front of me. I followed the sound and found a six foot bull snake in the brush next to the path in front of me. 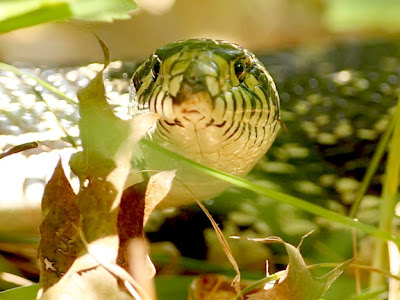 Growing up in Minnesota I do not have much experience with snakes, other then garter snakes, so when I saw this very large and very thick snake hissing on the ground in front of me I decided that it was time to turn around, not before getting a couple of pics of course. When I got home I took a look at the pics and was able to identify it as a bull snake. According to the Wisconsin DNR, the bull snakes are the largest snake in the upper Midwest. It likes to live in sandy locations usually adjacent to limestone cliffs. It eats rodents, primarily mice, rats, and gophers, which it kills by constriction. The bull snake is a protected wild animal in Wisconsin.
Posted by Ecobirder at 7:37 PM

As always, nice photos. I can't get over how close up you can get to these insects.

The snake would have freaked me out but I too would have tried to get a picture.

Some new dragonflies for me, interesting! The snake was sure standing it's ground, doesn't look to be intimidated at all.

Sorry , I messed up on the spelling on the last post so I deleted it. Your photos are great, That bull snake looks weird. I took a picture of a dragonfly last year that looks sort of like that first one. It had the large clear wings with spots and the large body. I had never seen one like it is this area and didn't know what kind it was. It was about dead but I got some closeups of it. Helen

Excellent pics, especially that last one.

I wonder if you knew the snake was harmless to humans when you took those incredible shots! They are truly fantastic.

Nice find on that snake. Our southern equivalent is the pine snake, but I haven't seen any out yet this year.