For many years Michelle and I would take a vacation every January or February. This worked out great because I would chose a destination that had a lot of wildlife for me to photograph and some where warm to make Michelle happy. So we made many trips to Florida and California and also visited south Texas and Hawaii. 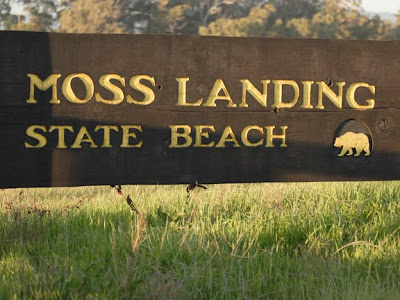 When we travel to California our favorite place to stay is down in Monterey Bay. We usually stay at the Best Western Beach Dunes Inn, not the fanciest hotel but it is affordable and right on the beach, in Marina, Ca. From this central location we can head south to Monterey, Carmel and Big Sur, or go north to Elkhorn Slough or Moss Landing. 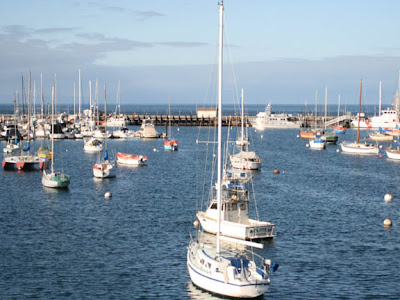 Moss Landing is a little harbor town near the middle of Monterey Bay. We first explored the area while waiting for a tour ship, that we were taking through Elkhorn Slough, to depart. 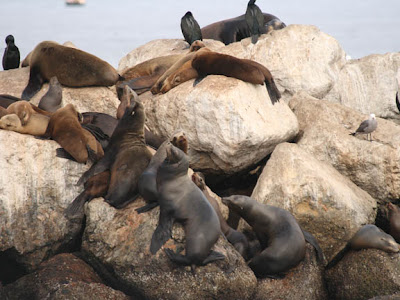 We found a lot of cool things in the area to photograph, like the California sea lions that liked to sun them selves on boats, docks, dingies, and the breakwaters. 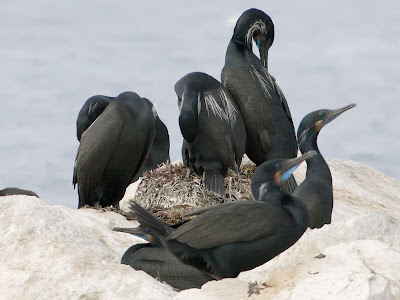 The breakwaters also provided an excellent nesting habitat for Brandt's cormorants, a Pacific species of cormorant that we never see in Minnesota. 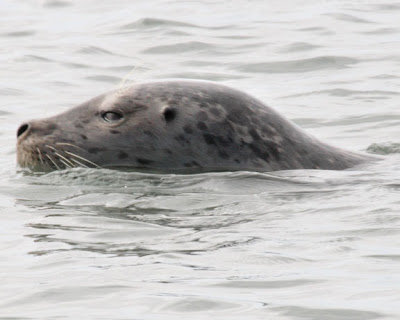 Swimming around in the harbor water you can often catch a glimpse of a harbor seal. Notice that the seal has no ears. That is one of the primary differences that distinguishes seals from sea lions. 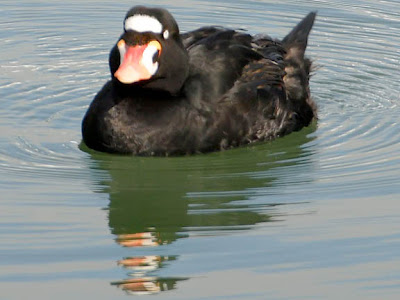 There is usually a few coastal birds hanging around the harbor, like this surf scoter. Surf scoters bread up on lakes in Alaska and northern Canada but they typically spend their winters along the Pacific and Atlantic coasts here in the US. 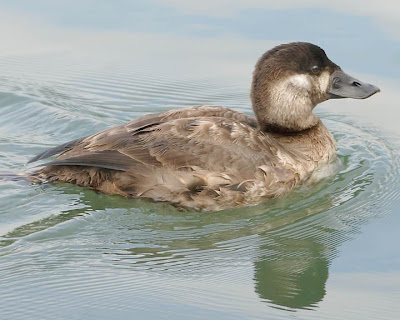 Like many types of ducks the female surf scoter is not as colorful as the male. 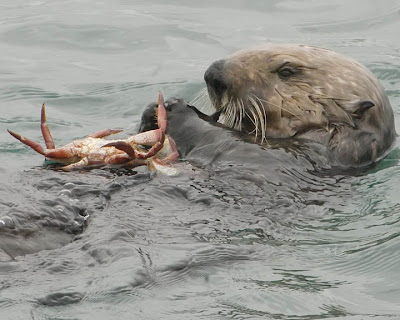 When we visited in 2007 we were lucky to see a lot of sea otters in the Moss landing harbor and beach area. While I was carefully walking out the breakwater, that keeps the larger waves from hitting the beach, I spotted this sea otter diving in the water. 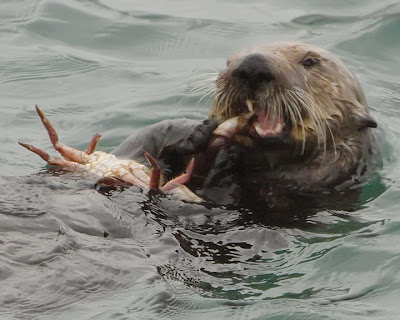 I was pleasantly surprised to see him come up with a large crab. The main diet of sea otters is clams, crabs, snails, mussels, sea urchins and other marine species. 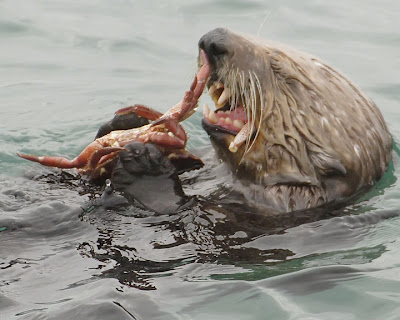 You can sea that this crab was not going down with out a fight. The sea otter has to hold on tight to the elusive crab while trying to keep out of range of the wicked claws. If the otter were to grab a leg instead of holding on to the shell the crab would shed the leg and attempt to escape and then it would grow the leg back again later. 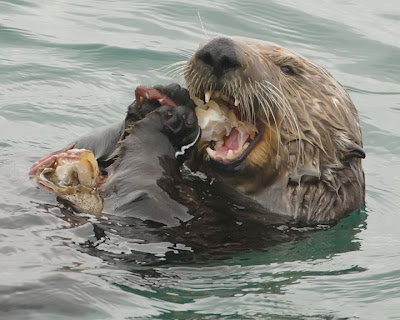 However sea otters are very dexterous. They are the only marine mammal that will catch fish with their forepaws instead of their teeth. They are also fairly intelligent, they will often use tools, such as rocks, to break open hard shells. On this occasion however the otter used his incisor teeth to access the meat. This is a good thing, at least for the otter, as they frequently eat up to 25% of their weight in food each day.

Your photos are always so great! Thanks for catching all these incredible moments and sharing them online!

I like the idea of taking a vacation where you both are happy!

And these otters know where people who go crabbing go. Every time we threw our nets or other people threw their nets, they dive and take all the baits (salmon and chicken). They are pretty clever creatures.

I love this part of Cali too.

What i like about this meme is that there aren't only great photos to be seen but also interesting facts to read. Thank you for sharing this all.

EB: That was an interesting park for sure. Those were some great photos. Congrats on being # 1 on the list, hope you get a lot of visits.

Fascinate view of the fight for survival!

This week I am more envious than ever. We have one family of European cormorants here but all the wildlife you have is incredible. Adorable images.

I love the duck photos but the otter photos are pretty cool also. Great job with you photos! Hope you have a great week.

So thoughtful of you to take Michelle to a nice warm place where you can indulge your need for the golden moments that nature provides.

Great pictures and informative post. Thanks for sharing. I think I need a beach fix soon.

Fun post. I must be part otter. Crabs are my favorite food too.

Great tour and awesome images. Nice to be somewhere warm when it's cold at home.

Your photos are marvelous! And I loved learning things about the sea life that I didn't know. A really great and informative post in addition to the beautiful photos! Thank you for sharing.Hope you take another trip soon to share with us!

Great post and great photos. I should make an effort to get up the California coast more. Maybe I could see some of those sea lions for myself.

WOW! now those are some great photos, especially the sea otter. Thanks for sharing your world

Thankyou for the wonderful photos of my favourite animal, the Otter, these are great showing just how they eat.

Mary and I had a vacation planned for South Texas this week, but when the economy started going south we thought it would be wise of us to stay north. I'll be thinking about that every time I'm out and about during this lovely stretch of weather.

Loved this posting! Very informative and entertaining! Especially loved the antics of the sea otter!

fascinating pictures you got here! And now i got my answer about the difference between the seals and the sea lions. Love your post:)

all your photos are wonderful but the sea otter ones particularly so, wonderful to get so close and take such detailed shots, they're lovely creatures.

The importance of social networking sites in today's world is immense. Indeed, the above mentioned websites are best, however there is also a latest Social Networking site MyworldGo , where you can connect with others. We are also available on iOS and android.