Minnesota is home to over 1300 nesting pairs of bald eagles. We have more eagles then any other state in the continental United States. During the warmer months of the year the eagles spread out and can typically be found near one of our many lakes or rivers. 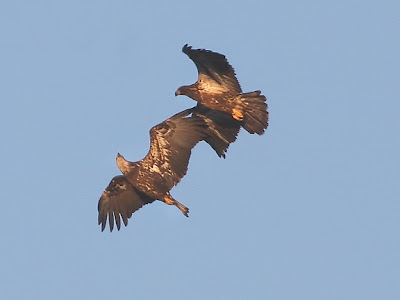 During the breeding season the eagles will establish a territory, typically one to two square miles, and defend it from other eagles that dare to trespass. 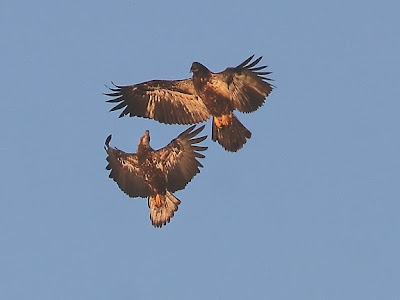 During the winter months however, many eagles migrate to places where there is open water. They congregate at these spots because the open water provides them access to fish, one of their primary food sources. It is possible to find eagles not near open water during the winter as long as there is enough food for them to survive, typically this would consist of road kill deer. 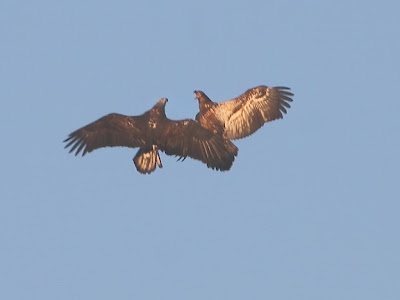 While they are all grouped together, during the winter, they are much more tolerant of each other, although there seems to be very little cooperation between the individual birds. Once in a while though an altercation does take place. 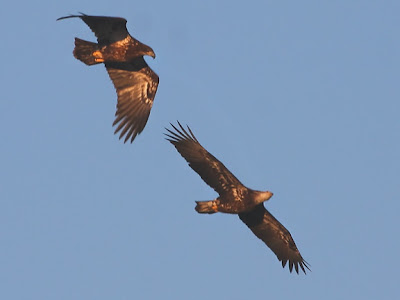 Most displays like this one are actually part of the bald eagles courtship ritual. Bald eagles who are courting will often fly up very high where they will lock talons fall spinning towards the earth. Just before they hit the ground they will release and soar back up into the sky. This behavior is called cartwheeling. Coarting pairs will also sometimes chase each other, rolling and flying upside down, through the air. 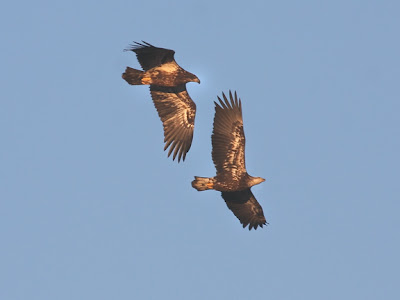 It is doubtful that this pair, that I photographed in Redwing, MN back in February of last year, was courting. Eagles typically do not begin courting until they reach maturity, at around five years of age. You can tell that these birds are still pretty far from being mature because they have not yet begun to get the white head and tail that are pretty much the indication of a mature eagle. Plus since these birds appear to be about the same size that would indicate that most likely they are probably both the same sex, as with most of the raptor world females are typically bigger then males. It is most likely this was some minor aerial combat over some reason that we will never know.

Fabulous photography. We went 'over the sea to Skye' in the hope of seeing eagles - but they eluded us. The seals made up for it, though!

Whatever the reason you got some great shots from it. Helen

Spectacular shots!!! A quite incredible series. What more can one say?

Do you happen to know at what winter air temps eagles tend to become inactive? I've been sitting in blinds this winter on days when the temp has ranged up to -5, but the eagles just haven't been leaving the trees. I was thinking if there's an air temp that causes them to slow down dramatically I could save myself some time and effort by waiting until things warm up before humping my stuff into the blind.

My pick is the 2nd photo.

Colvill Park is an incredible spectacle in March...assuming this is the location where these awesome pics were taken. Quite the oddity with both being juveniles.

Amazing shots and with the blue sky as the backdrop, perfect!

Great information about eagles! White on the head and tail of a mature one, eh? I'll try to remember that.

Awesome action series. What a scene to have watched!

Very beautiful photos for a SWF!I like your second photo!Have a nice weekend!

I get they're practicing their aerial courtship maneuvers.

You certainly see more than the sky and clouds when you look up to skywatch.

The timing of these shots are brill, nice work.

Terrific series of shots and loved the informative comments too! I had no idea that the females are bigger than the males!

What an interesting piece of information about these magnificient birds. Occaisionally I see them over here flying over the sea and I was first surprised you called those balled eagles as I did not know it took them time to aquire the white head. Absolutely amazing series of shots too.

What a great post... wow... and the photos along with this reading is perfect... what terrific captures!!!!!!!
~Michele~
Mountain Retreat

A fabulous post! The clear blue sky is gorgeous, but as a back drop for the eagles, and your text it is mindboggling!!! Thanks and have a great weekend!

What a beautiful series of photos. Happy weekend and SkyWatch!

These are some great captures! I love watching eagles fly. Happy SWF!

Just spectacular captures. Those are wow shots. Smiles B

Wonderful shots of the Eagles in flight, thanks for sharing on SWF.
You made some great shots on wing.

Excellent captures. Maybe they are immatures practicing for courtship.

What a nice shot. These are lovely. Thanks for sharing them.

these are amazing shots!!

your post most interesting read about eagles...and loved the shots.
thanks for sharing with us.
have a wonderful weekend.

Wow...amazing photos! I didn't know that about cartwheeling...interesting to observe!

Pictures such as these helpped me get into blogging... and inspired me to try my luck in the past.... I will try to make time this weekend to re-visit and look around...

Good birding to you!

This is a wonderful series of shots. Thank you for the education as well. Amazing what YOU get to see when you look into the sky!