This week the PhotoFriday challenge is white. I resisted the temptation to take my camera and just take a picture out the window, since right now pretty much every thing around here in Minnesota is white, and instead I decided to feature some trumpeter swan pics that I took at Crex Meadows, back on October 30th. 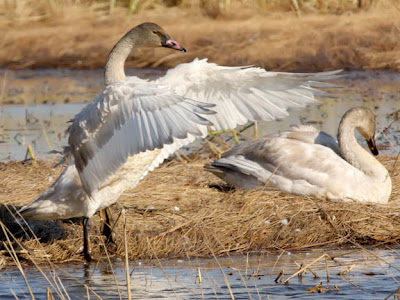 If you are wondering why these trumpeters look a bit different then normal it is because they are still not fully mature. The pink on the bill is a good indication of the age. 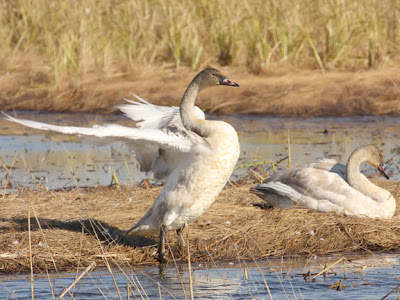 Young swans are called cygnets. When the cygents first hatch they are covered in down feathers and their eyes are open. They will usually leave the nest within a day or two of hatching and already have the ability to swim and feed. At this point they are mostly eating insects and other aquatic invertebrates. 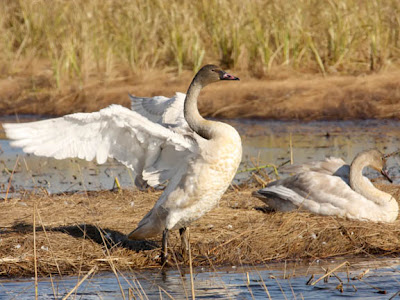 As the cygnets grow they will continue to stay with the parents. By the time that they are around four to six weeks old the cygnets diet changes to primarily aquatic vegetation. They have learned to uproot plants with their bills, which are pink in color at this time, just as their parents do. By around nine to ten weeks they have lost most of their down and they are fully feathered, although they are still grayish in color and can not fly. 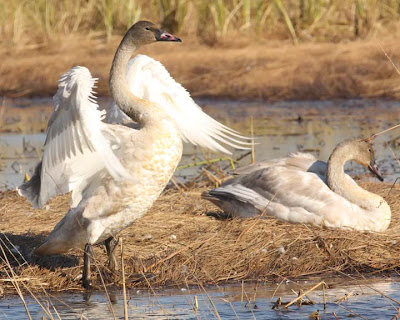 As winter approaches the family group will continue to stay together. By this time of the year the feathers on the cygnets, who are about the same size as their parents, have become much lighter and the pink bill has begun to turn black. The cygnets will begin to make short practice flights in preparation for migration. Much of the population in this area does not migrate very far in the winter, it is very common to find trumpeters wherever you find open water during the winter. The cygnets will spend the entire winter with their parents but come next spring they will be chased away before the next mating season begins. 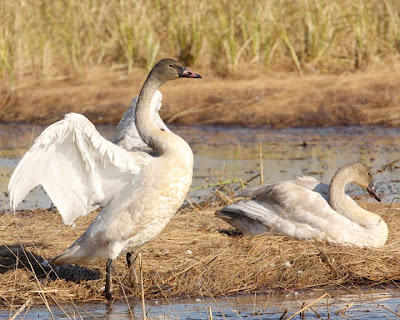 Trumpeters were once on the verge of extinction. In fact in the early 1900's they were actually believed to be extinct. Fortunately a small population survived in remote areas of Alaska, Canada, Montana, Idaho, and Wyoming. In the 1930's the federal government began a program to reestablish trumpeters in the northern United States using nesting pairs that were found out in Yellowstone National Park. In the 1960's and 1970's swan populations were reestablished in Minnesota and Wisconsin.
So if baby swans are called cygnets, what are their father and their mother called?
Posted by Ecobirder at 4:31 AM

Beautiful photos! I saw my 1st trumpeter swan at Seney natl wildlife refuge in the UP of Michigan. The juvenile's necks seemed almost rusty to me. Your swans are a bit more attractive!

It's wonderful to see a species make a comeback. The trumpeters look healthy and hale and I hope they continue to recover their numbers.

Wonderful images of birds.
I found myself posting images from October this morning as well, but for the sky, not white. Thanks for the info about these beauties as well.

Oh, they are just so beautiful and your photos do them justice.

These are wonderful! I love that you were able to capture it spreading its wings.
:-)

Interesting and informative. My sister in law lived in Siren Wisc. and on the way up there we often stopped at Crex meadows especially for the Sandhills.

Beautiful pictures. I'm glad you chose the swans and not snow for your post!