The sharp-shinned hawk is the smallest member of the genus accipiter found in North America. Accipiters have rounded wings, like the est of the hawk family, but they have relatively shorter wing and a longer tail. 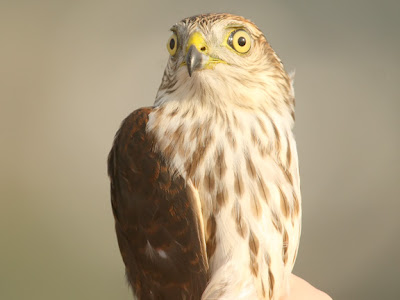 Accipiters use these adaptations to help them maneuver in flight, particularly while they are hunting small birds. The other members of the genus accipiter that can be found in North America are the Cooper's hawk and the northern goshawk. 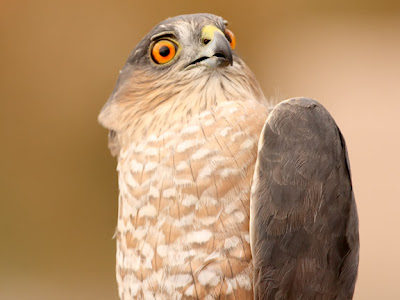 Each year many sharp-shinned hawks migrate south from Canada and can be seen at hawk watches in the US such as Hawk Ridge in Duluth, MN, where all of these sharpies where caught and banded. Not all sharpies migrate south however, since the number of people who have put up feeders has increased so has the number of sharpies that have stayed further north. 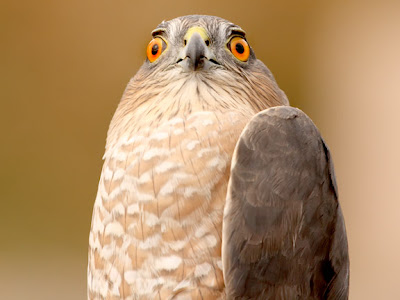 Since the sharpies are mainly eating birds, feeders attracting song birds in the winter become a convenient feeding ground for sharpies, and Cooper's hawks as well. 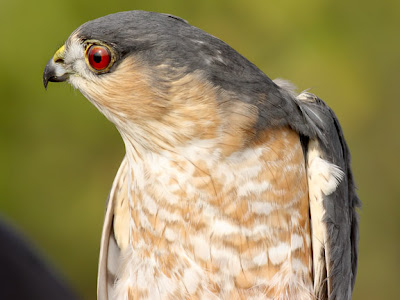 You can tell the ages of the birds pictured above by the color of their eyes. The first bird pictured is a hatch year bird. When sharpies first hatch they have yellow eyes which darken with age. So the bird in the second and third pictures would be a second year bird, since its eyes have changed from yellow to orange. The bird in the final pic is at least a third year bird. As you can see the eyes have become completely red. Once they reach this point the eyes will no longer change, so it is pretty much impossible to tell a sharpies age, once they reach adulthood, just by looking at the eyes.

Great shots. Interesting bit about those eyes and age. Helen

Oh if only the Coopers and Sharpies would wear name tags. I am getting better, but not there yet. I didn't know about the orange in between the yellow and red. I will have to watch more carefully, but things happen quickly in the yard...Michelle

Thanks for the lesson on age by eye colour so clearly illustrated by your photos. We learn something new every day.

Sensational images and very educational. The eyes are so expressive

I'm glad you shared that info about the eyes - I'll need to look closer. Beautiful photos as always!

Great photos and post. I had no idea about the eyes. Thanks for enlightening me!

I also love the post about the lupine above. It's one of my favorite flowers.