Its funny how sometimes when you make plans to go out birding you find very little happening, but when you go out the next day, on a whim, you have a good day. That is what I found this week. After a very cloudy and disappointing holiday weekend I was pretty pumped up to see that the weather forecast was calling for sun and warmer temps this week. So I planned a trip, on Thursday, over to Prescott, WI to look for the harlequin duck that has been wintering there and then a side trip to Carpenter Nature Center to look for white-winged crossbills, which have been spotted recently. When I arrived, after leaving work, I found the area covered in fog. So I went home and ate some food and returned later. By that time the fog had lifted but unfortunately the harlequin was not to be found. I went to Carpenter, where I did see a lot of birds, but no crossbills.

So Today when I got off of work it was sunny, although the windchill temps were well below zero, so I decided to run back to CNC to give the crossbills another chance, but I never even made it. I stopped over at Prescott first and there in the middle of the river was the harlequin. While i watched the bird swam up and down the river near the railroad bridge and even came close to shore on a couple of occasions. I stayed there watching, and photographing until almost sunset and then headed home very happy.

I am hoping that my luck will hold out for this weekend. It is supposed to be cold and sunny for much of the weekend and I am hoping to make another foray up to the Sax-Zim Bog Wildlife Management Area. 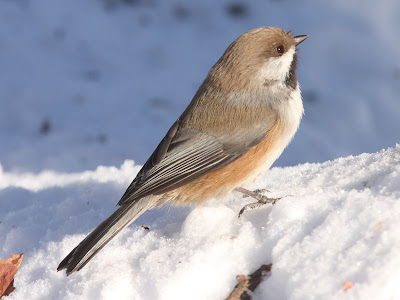 On my last trip on January 10th I had some really good luck with some of the special winter migrants like the boreal chickadees. 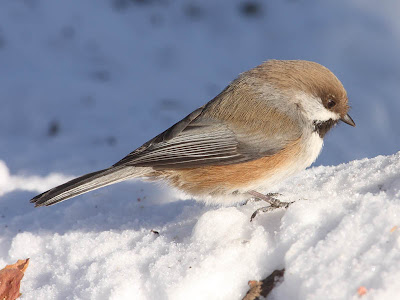 Boreal chickadees spend most of their lives in the northern boreal forests of Alaska and Canada. They are one of the few types of songbirds that do not leave the frozen north during the winter time. 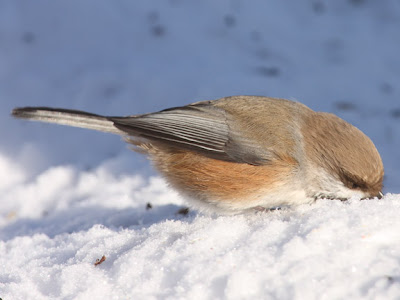 They survive through the winter months by caching food in the summer and fall. Their typical fair consists mainly of insects and spiders, including larva and eggs, as well as seeds, particularly spruce seeds. 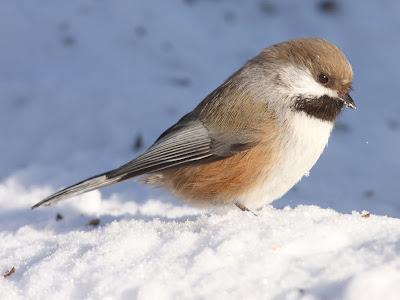 Some birds will migrate a short distance south, typically the reason for this is because of a shortage of food. These birds, that come south in search of food, typically only come as far south as northern Minnesota. That is why the Sax-Zim bog is a great place to look for these typically elusive migrants. 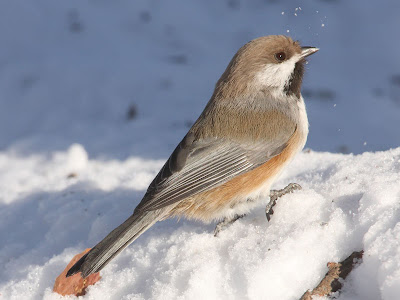 These pictures were taken on Admiral Avenue near where some local birders have hung portions of a deer carcass. The boreals, as well as many of the woodpeckers, are drawn to the protein of the deer meat. If you would like the chance to see boreal chickadees, as well as redpolls, gray jays, black-backed woodpeckers, three-toed woodpeckers, northern hawk owls, great gray owls, boreal owls and snowy owls then you may want to take a trip to the bog. The Sax-Zim Bog Winter Birding Festival is coming up February 13th through the 15th. Registrations are accepted until January 31st, although the festival is limited to 150 registrants and I am not sure how many spots are still left. For more information you can check out the festival website Here. For more information on the bog you can check out the bog website or Mike Hendricks blog Colder By the Lake where Mike has documented most of the winter owl sightings in the state.
Posted by Ecobirder at 6:17 PM

This chickadee is sooooooooo cute! I want one! Man, this funny sounding bog sounds like a place I need to see! Congrats on seeing the harlequin!

I could look at that bird all day. I love all of the different colors it has compared to the black capped which is what we have here in the North East. The photos are great!

Thanks for sharing them.

That is a very pretty bird. Of course all we see are the blackcapped ones which are still beautiful. They chirrip at me when I fill the feeders. I don't see how such small birds withstand all that snow and cold weather. Glad that you got to see the duck. Helen

the city where is stay is so urbanised so I hardly get sightings of animals. I'm totally envious of u .

If you're interested in Boreal bird protection, please check out http://www.thebigwild.org -- we're working to protect at least half of Canada's wild places.