I took this shot at the Sax-Zim Bog Wildlife Management Area on January 10, 2009. 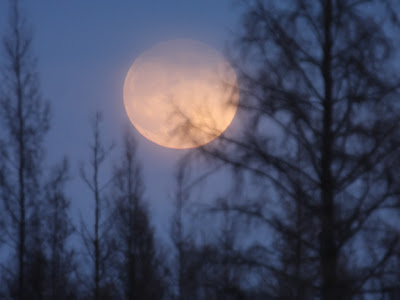 This was my first trip up to Sax-Zim this winter. I try to get up there at least a couple of times each winter because it is probably the best place in Minnesota to see some unique birds that come down from up north during the winter. This year there have been more reports of owls then there have been in the last few years, at least since the big invasion of 2005-2005, so I have been excited to get up there but unfortunately the weather has not been so cooperative, at least not with my work schedule. The week before the tenth I kept looking at the weather forecast and things were not looking good so I figured that I would probably spend that Saturday birding close to home. When I got up that morning I got onto the Internet and checked out the weather maps and it looked like the Sax-Zim area might be clear so I decided to take a chance. My chance paid off as the weather was clear most of the day, there were some clouds that moved in the evening, and I was able to get some great pics of boreal chickadees, redpolls, gray jays and more. As I was about to call to a day, and start the two and a half hour drive home, I noticed the moon in the eastern horizon. So I stopped to take this picture. About 10 minutes later, as I was driving down highway 7 on my way out of the bog, I spotted a great gray owl perched on a power pole on the side of the road. It was a good day.

That moon is fantastic, all it needs is a great owl in front of it.

It sound like a terrific day.
Would you share your camera settings on that moon photo?
Are you going to the festival in Feb.?

What a wonderful photo! I am going to have to send my daughter here, as she also loves big orangey moons!
Thanks for sharing!

Oh my goodness..what a photo...

That photo is amazing. The moon looks almost veiled at the top. Very pretty.

That moon is positively magical.

what a beautiful shot...love how the tree branches give a whispy-ness to the shot...
have a great weekend.

Wow a moon shot like that and seeing on owl too! I'd say that was a good evening. Happy SWF!

Beautiful photo! I hope you will be posting others of your trip.

I'm doing SkyWatch for the first time this week, so I'd love it if you'd stop by:

Well that does sounds like a good day. This image is lovely, I like the soft focus quality to it. Sets a strong or soft mood that I like.

Any day you see a full moon and a Great gray owl in a good day! Perfect sky and bird watching I would say!