Over the next couple of months do not be surprised to see multiple posts on many days. While going over things over the holidays I have found that I have over 150 posts still in draft form. That is enough to post one post a day for around five months, and that does not count pics that I will be taking during these winter months. 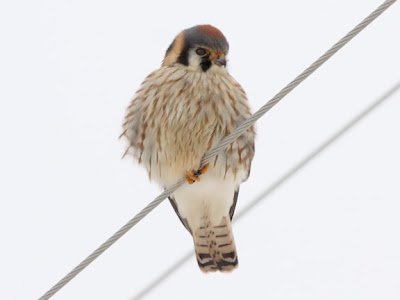 I spent last weekend doing two Christmas Bird Counts. These were the only two CBCs that I did this year, compared to the five that I did last year. The main reason for the cut back was that I did not do the Duluth and Two Harbors counts this year because the dates were not on the same weekend like they were last year. It would have been hard to drive two and a half to three hours up there in the early morning, spend all day on the count and then drive back in the dark. So this year I just worked on the Hastings and Redwing CBCs. I did Hastings on Saturday with Drew which is where I photographed the kestrel pictured above. 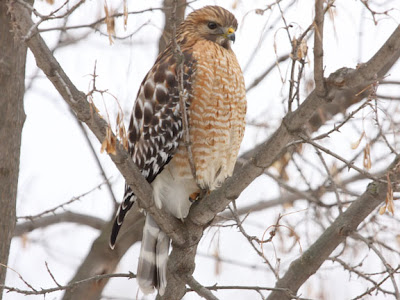 This red-shouldered hawk was also from the Hastings count on Saturday. Drew and I found 27 different species. On Sunday I went out with Jim and Jim and we found 22 different species on the Redwing count. This year I decided to concentrate more on the count, which is why I did not take many pics. I brought the camera just in case we needed to document anything that we found. The funny thing was that on Sunday we found a small flock of cowbirds, on a farm south of Redwing, that I should have taken a picture for documentation but I did not even think about it. After all they were cowbirds, a common bird that I frequently see that many people consider a pest, but they are rare in Minnesota at this time of the year so I really should have taken a pic. I guess I will know better next year.
Posted by Ecobirder at 3:45 PM

They are both beautiful shots. Helen

Just because you have the shots doesn't mean you can stay home for the next 5 months!
Just kidding!
I always enjoy your work, regardless of when the photos were taken

Awesome shots. I would love to just sit and watch these birds for hours in the wild if I could.
Smiles B

I don't usually admire birds but this photographs changed everything. beautiful!!!!