Most people have heard of honey bees and bumble bees but I bet if you asked around you would find that not many people have ever heard of sweat bees. However sweat bees are common around most of the world, except in Australia and southeast Asia where they are less common. 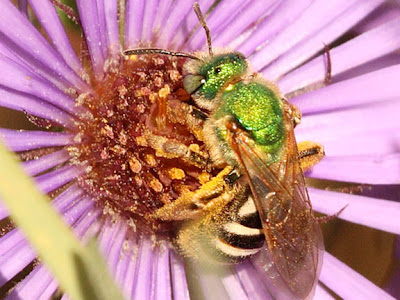 The term sweat bee refers to bees in the family Halictidae. Some members of the Halictidae family are attracted to the salt found in human sweat, this is how they got their common name. Fortunately this bee, which I photographed at the Maplewood Nature Center back in August, was much more interested in the flower. 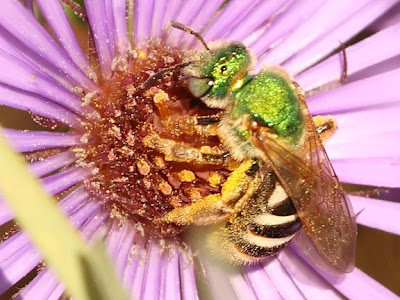 There are about 1000 types of sweat bees living in North and South America. Most of them are small to medium size, which may be why they seem to be relatively inconspicuous even though they are typically the most numerous type of bee, and are black, brown, red or metallic green in color. 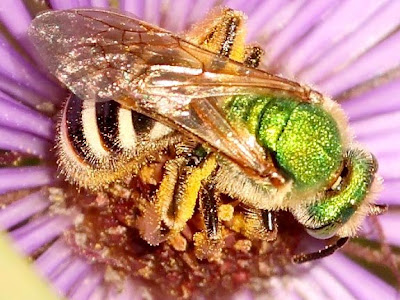 Metallic green sweat bees are a member of the genus Agapostemon. There are over 45 species of these green bees in North America. Unlike honey bees and bumble bees most of the green bees are solitary nesters, nesting in borrows that they dig under ground. Even in species of green bees that do nest communally usually each female typically builds her own nest cell. Since most green bees are not very aggressive and do not sting very hard they are usually not considered pest species. In fact, since they tend to be floral generalists, they visit a wide variety of flowers, they are usually considered a beneficial species. They collect pollen, which they bring back to their nest, by use of a series of brush like hairs, called scopa, on their hind legs.

Posted by Ecobirder at 7:55 PM

Great bee series. I love the pop of the green against the pink flower.

Wow, that is some awesome green on the sweat bee, and you're right, I'd never heard of it before. Very interesting! Thanks.

Growing up I heard the words sweat bees from my Grandpa but I was thinking tiny. This isn't tiny and with the metallic green it seems a little alien. :)
Wonderful images!

Hi there - I'm Australian :)
I'd never heard of this bee, nor seen it before!!

Wonderful macro images - I can see every hair on it... not to mention the detail in the wings is amazing.

Wow! These are excellent photos.

Very cool bee images. I've never seen one quite like this before!

Those are pretty colored bees. We have some kind of tiny bee or wasp around here in the summer that is turquoise in color. Very pretty. I have no ised what kind they are. Helen

I've never heard about sweat beess before. Do they really shine that much as on your photos?

You learn something new every day! I'd never heard of a sweet bee and I don't think they exist in the Netherlands? Beautiful colours.

Great photograph! Thanks for including the information that certainly is fascinating. Have you ever visited Abraham's blog...he belongs to City Daily Photo group and is a master photographer. Several of his blogs are devoted to animals so you might enjoy it. I took the liberty of linking your blog to mine.

I've heard of Sweat Bees, but I must admit I've never notice a metallic green one before! These photos are awesome!

What a magnificent colour!!

Veyr cool. I was out watching these guys pillage my Echiniceas (sp?), and it made very curious to find out what a green bee was all about. I guess another factor was do they sting or not, and are aggressive. I tend to get a LOT of them daily here in S. Ontario.

Hi ecobirder,
This is a good one, do you mind if I use in on my site at www.factzoo.com? I am making a bee page.
There are also carpenter bees that are metallic green.
cheers

I just watched a episode in Science Channel about bees in particular. They referenced Melaponis and green bees in Brazil/SA. I didnt relaize they were in North America.

Wow excellent pictures.I just love to see pictures like this.

Oh My Gosh I never new that I have a whole other side to learn. Hey, you know what they say you learn something new everyday. I love your photos and the bees are shiney here. I just now caught one and was confused about it. Thanks!

I saw one of these yesterday Never saw one before took a couple pictures and a short film http://www.youtube.com/watch?v=xmCcocxvtnU

I just saw a green bee just like the picture yesterday. It was flying just above the ground to a tiny hole in the ground in central WA state. (Funny, I have a relative who works at Maplewood Nature Center. I simply googled images for a pic of green bee and came across your pics and this site. :-) )