This weeks Photofriday Challenge is disorder. There is quite a bit in nature that you could probably classify under the heading of disorder, weather is the first thing that comes to my mind. However it is my belief that nature has its own order, and just because it does not always fit into man's logic or we can not predict it does that really mean that we can call it disorder? 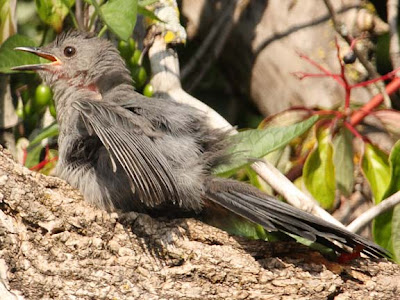 For the challenge I have chosen this gray catbird that I photographed at the Maplewood Nature Center back on August 15, 2008. The reason why I chose him to represent this challenge should be obvious. 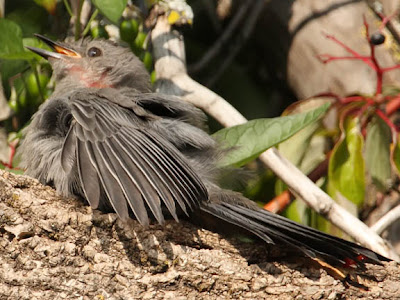 He spent quite a while out in the open on this log preening. He would make a great poster boy for the old saying, "things are going to get worse before they get better". I did see him again a few days later in about the same spot and he looked pretty disheveled and in disorder again on that occasion also.
Posted by Ecobirder at 4:34 AM

Makes me wonder if a critter got ahold of him and ruffled him up. Anyway those are some great pictures. Helen

Great picture; I think the birds also open all their feathers to let the sun shine onto their skin, probably to get rid of mites and fleas. I have noticed their "unarranged" feathers on birds in my garden. Sometimes they nearly turn onto their back.

Maybe he was a teen who needed his Mom to remind him to wash his face and comb his hair!