With a wingspan of approximately 8 to 9.5 feet and a weight of 10 to 20 lbs the American white pelican is one of the largest birds in North America. 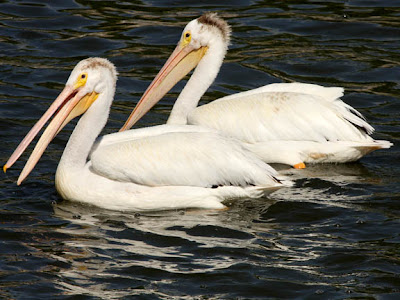 These large white birds breed on lakes from western Minnesota west to northern California. During the winter they migrate south to wintering grounds in southern California, Florida, the gulf coast and Mexico. I photographed these pelicans at the headwaters of the Minnesota River, near the Minnesota and South Dakota border, back in August. 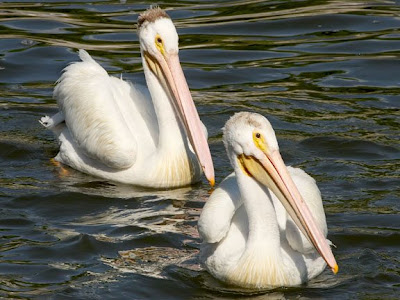 American white pelicans do not hunt like their brown cousins do, brown pelicans fly over the water and dive in when they see potential prey, instead they hunt by swimming in the water and using their beaks to scoop up water and prey. 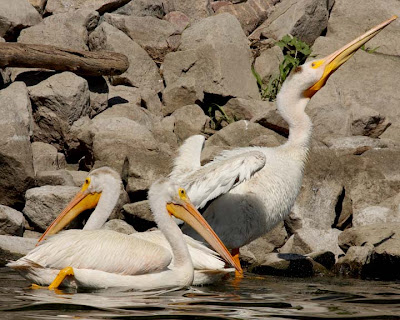 The membrane that makes up the lower half of the beak can stretch to allow them to scoop up to 5 gallons of water. They then strain the water looking for fish, frogs, aquatic invertebrates and other prey. Several pelicans will often work together, swimming in circles to corral the fish and then dipping their heads underwater simultaneously to scoop them up.

Posted by Ecobirder at 9:26 PM

Quite different colouring from our black and whitepelicans in Australia! But still a big bird! Some fantastic shots!

I've never seen white ones. These are beautiful and your shots are wonderful!
:-)

Love these photos! These are such unique birds. And that one guy looks like he has a little brown hat on, lol.

Those are beautiful shots. We don't have any of those close to us. Helen

Like the White Pelicans. I usually just get to see the Brown Pelicans, which I do like very much.

I enjoyed this very interesting post. I had seen photos of these birds before, but had not realized they were quite that large. Thank you for the information.

Woow, a very nice post... I would really like to see these birds, but I do not think we will ever see them in Icelamd ;-)
Nice story and very nice pictures...

I did not realize your pelicans were quite so large. Ours are big birds too but not quite that big!

Wow, nice pictures. The second one is almost like "Take me from this side, my better side." Cute.

Pelicans are such wonderfully comical looking birds and as per usual your photos are truly exceptional.
I once had a friend called Charlie during one of my greek holidays and Charlie was a pelican.