There are some birds that are pretty common here in Minnesota during the summertime that people are surprised to see during the winter. The eastern bluebird is a perfect example. 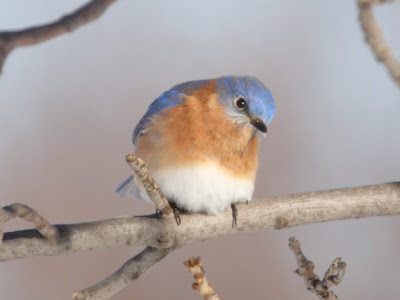 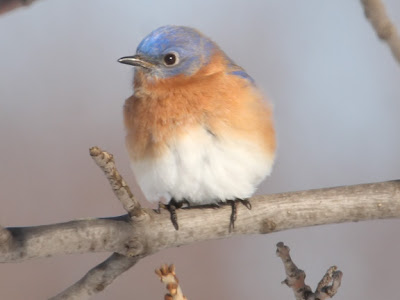 Cornell does state that in mild winters eastern bluebirds may be found further north but I do not know of many people who would consider this winter mild, it has been the worse we have seen in many years, and yet I photographed these bluebirds in Redwing, Minnesota on January 5th, 2009. 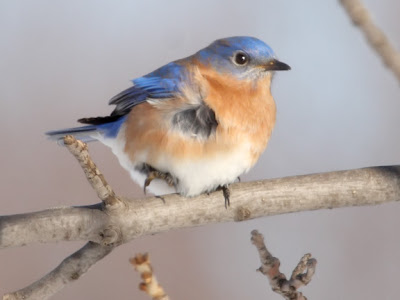 This is not an isolated incident either. I have participated in Christmas Bird Counts over the past couple of years and pretty much every count that I have worked on in the southeast suburbs of the Twin Cities we have had recorded eastern bluebirds. So I guess it is true that everyone makes mistakes, which is fortunate for those of us living in Minnesota who catch a glimpse of these colorful songbirds during the drab days of winter.

Posted by Ecobirder at 6:04 PM

What a beautiful bird! One of my favorites things to do it watch the birds in our backyard, but I haven't seen one like this!

Please check out my camera critter at:
http://eightymphmom.blogspot.com/2009/01/camera-critters-this-is-fun-head-over_31.html

Do you have a long, long lens or are you incredibly blessed to have a nearby tree that bluebirds like to roost? Either way, I'm envious!

One of my favorite birds that I look forward to seeing again this spring. Gorgeous pictures.

I love those little birds. They are my favorite bird. We have some around here. Helen

Beautiful bird, beautiful photos. We have western bluebirds around here, and they're lovely, too.

So beautiful, and such a treat during the winter. I just recently learned that bluebirds will over-winter if their food supply is steady. It's wonderful that you see them so regularly. Great shots! (As are all of your photos...I really enjoy following your blog!)

Jeff - I'm not so sure Sibley et al. made a mistake so much as we have better data now.They wrote the book before the Internet/digital cameras - and all the good observations are so easily shared.

What a beautiful little bird. Do you know how they survive the winter without freezing to death? I have always wondered.

Gorgeous pictures! Have I mentioned that I'm insanely jealous of your photography? Thanks for sharing it with us!