The bison is the largest land mammal in North America. It is estimated that at one time there were 60 million bison roaming North America. Today their population is estimated at around 350,000 with over half of that number being domestic bison which are being raised for meat production. 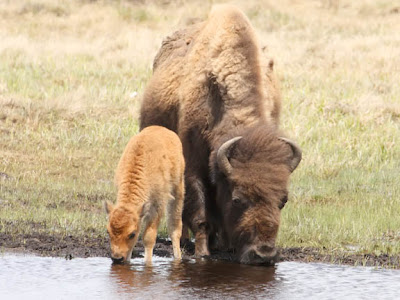 Yellowstone has the only continuous herd of bison in the United States. They are descended from 23 mountain bison that escaped to Pelican Valley, in Yellowstone, during the 1800's when the great bison heards where slaughtered to make way for the railroads and the expanse of the American civilization. 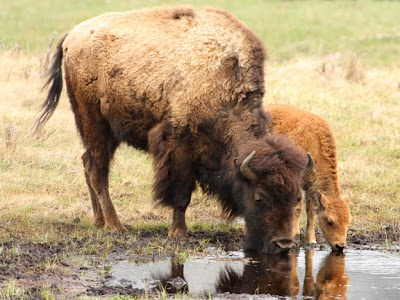 A captive heard, made up of 21 plains bison, was introduced and managed by the park in the Lamar Valley in 1902. Bison management continued in Lamar Valley, at what is now currently the Yellowstone Association Institute, until the 1960s when the park officials adopted a policy of natural management for the bison population. 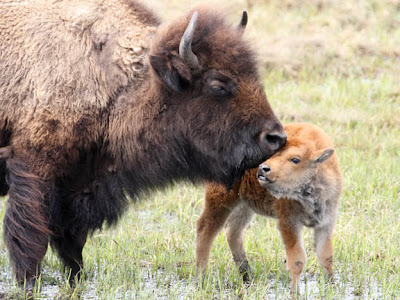 Male bison can weigh up to 2000 pounds with cows weighing up to 1000. They travel an average of 2 miles each day while grazing. In Yellowstone this often leads to bison jams. In many places in the park the road is the easiest, and sometimes only, route to travel. So the bison will use the road to get around. This leads to problems with motorists who are trying to drive through with out pissing off an animal who may weigh as much as your car. 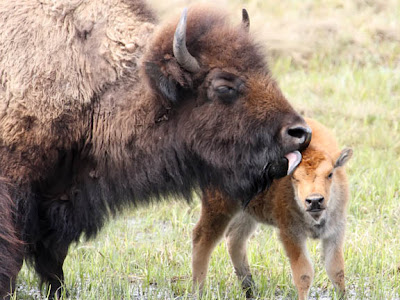 Michelle and I spent about 2 hours in a bison jam last year, which is why Michelle is not very excited when we see bison. While I have a lot of patience for bison who are in the road I have very little for people who do not know how to drive around them. I treat bison in the road the same as I would a pedestrian or someone on a bike. They have the right of way so I slow down, but when it is safe to go around them I will do so. There are too many people who just stop and wait for them to get out of the road, instead of going around, 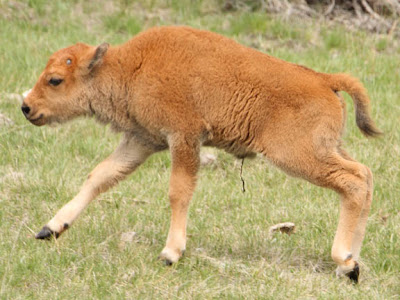 Bison herds are made up of family groups led by cows. Males travel solitary or in small group until mating season. During the mating season, June through September, bulls will keep a harem of typically 10 to 15 females. 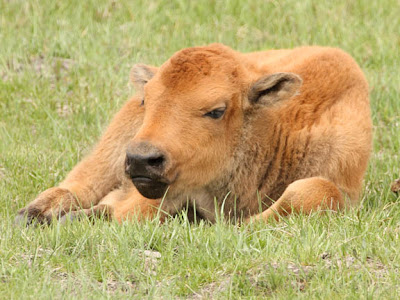 Calves are born in April to May, they are light in color and born with out horns or a hump, these begin growing at the age of about 2 months. Calves stay close to the mother who keeps an eye out for predators like bears, wolves and even coyotes. Most predators would have a problem taking down a healthy bison, however a calf that wonders away from the protection of its mother is easy prey. While we watched a herd of bison near Lamar Valley one day, a coyote came over to check out the herd. He looked like he might make a run on a calf that had strayed to far but he was quickly run off by the adults. Ground squirrel was probably an easier and definitely less dangerous meal.
Posted by Ecobirder at 2:52 PM

Beautiful series of photos of the Bison - enjoyed the information on them as well!

You are right. The animals, bison et all are great. The Lamar Valley is the best in YNP for variety. Some of the drivers though leave a lot to be desired, including their car doors open on the highway, when they leap out to photograph.