The other type of bears that can be found at Yellowstone are grizzly bear. We found our first grizzly on our first day in the park. As we were driving out to Lamar Valley we noticed someone hunched over and peering from the small hill that sloped up from the road. We had no idea what he was doing but, since It was only our first day in the park and there was a convenient parking place, I decided to stop and take a look. 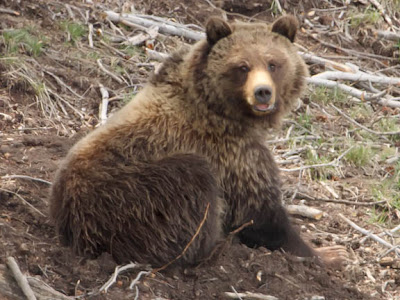 I walked up the hill with my camera and was still not sure what he was looking at. He had a small digital camera which he was using to take some pics but I still was not sure what. I was convinced that he was just shooting the scenery and was about to go back when he motioned for me to come over. 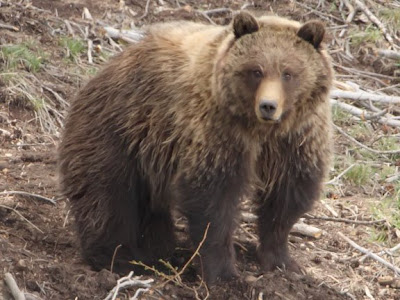 In hushed tones he told me that he was looking at a sleeping bear. I tried to see the bear but could not find it. My mistake was that I believed that it was closer then it actually was, this was probably due to the fact that with his small camera his pictures would only be specs from that distance. He was being very quiet trying not to wake the bear. Eventually I saw a large pile of fur in a scrape a ways away. Looking through my camera, with the 300 mm lens and doubler on it, I could tell that it was a grizzly but unfortunately all that we could see was its back and shoulder. 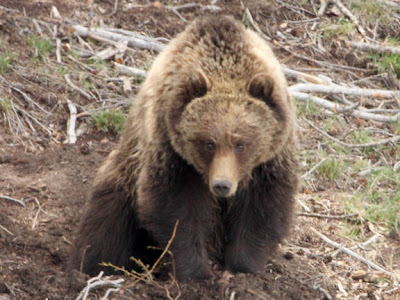 That changed suddenly. I saw the bear lift his head and stick its snoot up into the air. Very quickly the bear sat up and turned to face us directly and give us a very intimidating stare. His posture looked somewhat aggressive so we both decided to move back another 20 yards. He continued to stare and I continued to shoot. By this time we had moved back to the side of a large rock. 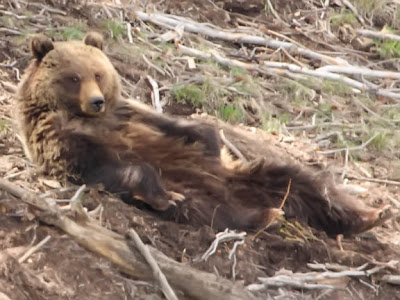 Having intimidated us sufficiently he decided that we were not a threat and he went back and laid back in his scrape. He did keep an wary eye on us but when he began to scratch his belly I relaxed a little. We could see that there were cars starting to stop down on the road, large camera lenses tend to do that in Yellowstone, so we decided that it would be best to leave before we had a bunch of people stopped and bothering the bear. When we got down to the road several people asked what we had been looking at. We lied because we did not want to tell them about the grizzly and create a jam. As it turns out many people had seen this bear about an hour earlier when it created a bear jam by crossing the road.
Posted by Ecobirder at 3:45 PM

I'm jealous too! You saw everything! Congrats!