Yellowstone also has a variety of larger waterfowl that nest in the park. The most unique looking of all of Yellowstone's waterfowl is the American white pelican. These birds typically spend their winters down in the coastal waters of Mexico or the southern United States. When it comes time for breeding they head inland to fresh water lakes in the western US and southern Canada. They breed in large colonies on flat isolated islands in larger lakes. 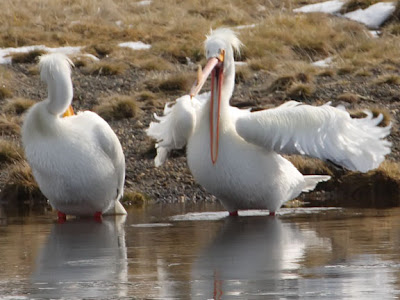 In Yellowstone they begin to return to the park in May. Often part of the lake, or in the case of this year all of the lake, is frozen so the pelicans spend their time fishing the open waters of the Yellowstone River. When the lake ice melts they move up to the Molly islands where they share their breeding territory with breeding gulls. 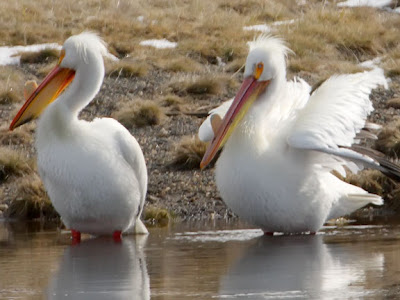 We spotted these two pelicans on the Yellowstone River on Friday morning when we were on our way to look for bears near the east entrance. The fibrous plate growing on the top of their bill is a sign that this is the breeding season. After eggs are laid the plate will be shed. When we first arrived they where both sleeping with their bills tucked in over their shoulder. They soon began to move and as you can see in the first photo one appeared to be yawning. After a good stretch they settled down and began to search the river for a nice fish breakfast. 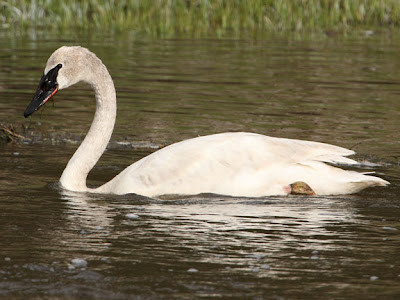 Trumpeter swans are another large waterfowl that nests in Yellowstone. They are slightly smaller then the white pelicans, the pelicans wingspan is around 110 inches compared to around 95 inches for the swan, and much more graceful in appearance. 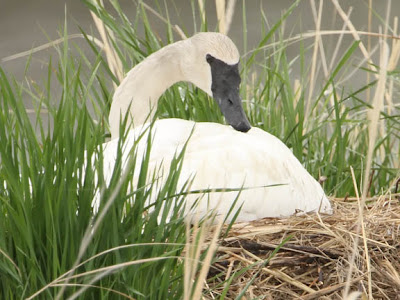 Trumpeter swans are fairly common in Minnesota and Wisconsin, so I have plenty of swan pics but since they are not so common in Yellowstone we stopped to take some pics. The first pic was taken on Monday, when we spotted the swan eating vegetation from the bottom of the Firehole River as we were traveling from Madison Junction to the Lower Geyser Basin. The second swan was spotted after we left the park on Saturday and were on our way between Gardiner and Livingston. It was nesting at a small pool that had formed in the ditch on the side of the road. 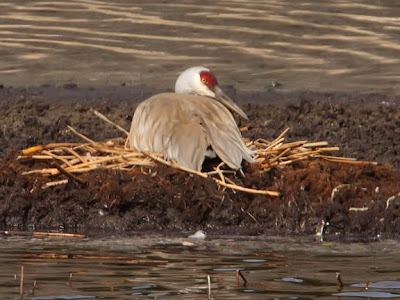 Another large bird that nests in Yellowstone is the sandhill crane. Every time that we visit Yellowstone in the spring we can count on there being a sandhill crane nesting on Floating Island Lake. Floating Island Lake is located in the north part of the park on the Blacktail Deer Plateau. It contains a small island which is perfect habitat for a nesting sandhill crane. The island helps to protect the nest and the nesting female from roaming predators such as coyotes, fox, weasels and martins.
Posted by Ecobirder at 6:50 PM

Just found your blog, love it. I have already added to my faves.