The pronghorn antelope is one of seven different types of ungulate, hoofed mammals, that live in Yellowstone. The other six types of ungulate are bison, moose, elk, big horned sheep, mountain goat and deer. Pronghorns, like the other ungulates, spend their time roaming Yellowstone's grasslands consuming large amounts of vegetation. 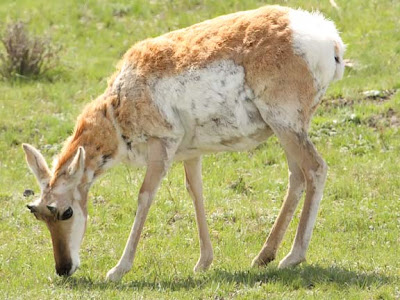 Pronghorn are named for their unique branched horns. These horns are made up of 2 parts, a bony core, which grows out from the skull, and an outer sheath made up of a hairlike substance called keratin. This outer sheath is shed and then regrown each year. Female pronghorns have smaller, typically non-pronged horns or no horns at all. The pronghorn above is a female. The males, like the one pictured below, have pronged horns which average about one foot long. 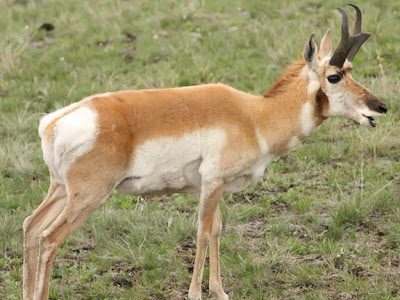 Pronghorns are found only in North America. They have adapted well to living on the open prairies and grasslands of the west. They have very keen eyesight which allows them to see movement up to 3 miles away. Their eyes are very large and set way back in their head, this gives them a 320 degree field of vision and allows them to watch for predators even when they have their heads down to munch on the prairie grasses. If a predator is spotted the hair on the pronghorn's rump will stand erect, making the rump appear more white, to warn other members of the herd to the danger. When confronted by a predator the pronghorn will attempt to run away. As the fastest land mammal in North America, sprinting speed is up to 60 mph, there are not many predators who can keep up. Even the cheetah, which is considered by most people as the fastest land mammal in the world, would be hard pressed to beat a pronghorn in a race. The cheetah may be slightly faster in a sprint, estimated between 60 to 70 mph, but the pronghorn can not only sprint at abound 60 mph in can also run at a pace of around 30 mph for many miles. Both of these pronghorn were photographed out in the Lamar Valley.
Posted by Ecobirder at 8:19 PM

So nice to revisit Yellowstone through your photographs.

I am begging my husband now to let me plan a trip to Yellowstone soon! Your photographs just make me long to be there!

So how close were you? Didn't he consider you a danger? What lens were you using to get such great photos.

Thanks Nina, Shellmo and Leedra. Yellowstone is a wonderful place especially if you are into wildlife. Since our first trip there we have been addicted and have returned every year. Leedra, most of the wildlife is not that close, although I did end up about 6 feet away from a wolf, those pics are yet to be posted. Many of the pictures where taken with a Canon 40D with a 300mm 2.8 lens with a doubler on it.