Most people who visit Yellowstone are there to see the large mammals that can not be seen in many other places in the continental US. Mammals like grizzly and black bear, wolves, moose, elk, big horn sheep and pronghorn antelope are the big attractions but small mammals are very important in the Yellowstone ecosystem. There are many rodents inhabiting the nooks and crannies of Yellowstone that are an important food source for the predators that roam the lands or soar in he skies above. These rodents also help to spread seeds which promotes the plant growth that is needed for the roaming herds of ungulates. 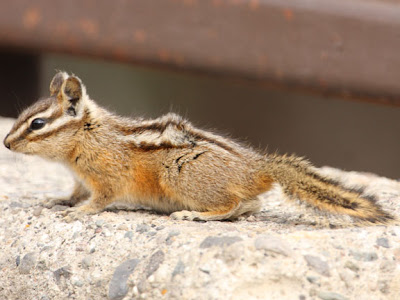 Chipmunks are pretty common in the forested areas and near areas where there are more people. 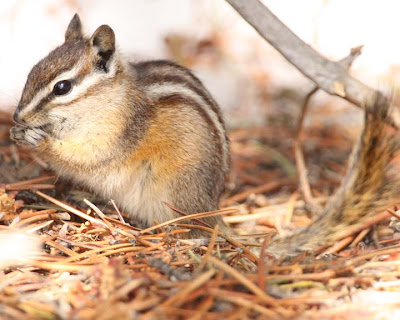 The first chipmunk pic was taken outside the Tower Falls gift shop. I was actually hoping to get some pics of the pine martin that is rumoured to be living around the gift shop but I had to resign myself to getting a picture of this adventures chipmunk searching the patio and parking lot for people food. The second chipmunk was photographed in the woods around Yellowstone Lake. 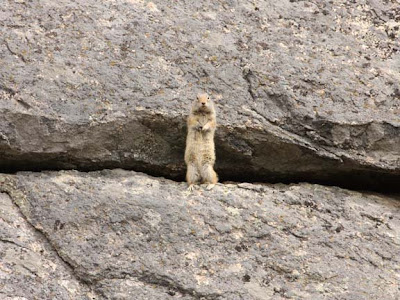 The Unita ground squirrels are common through out much of Yellowstone. They are very easy to spot in the Lamar Valley. 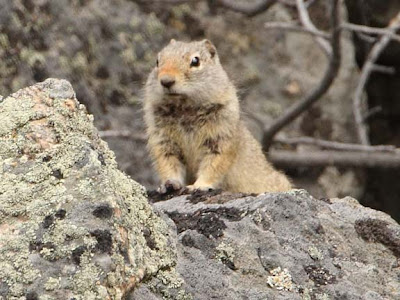 I spotted this little fellow running on the rocks out in Lamar. He followed the crack in the first shot and then came towards the road and peaked out at us. 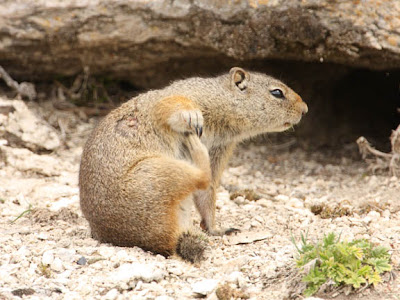 This little fellow was scratching an itch and showing off his butte over at Soda Butte. 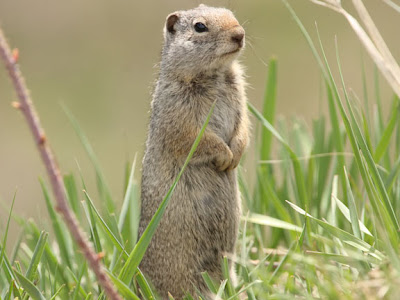 We also found quite a few of the unita ground squirrels on the other side of the park. The shot above and below were taken at pull outs near the Madison River on the west side of the park. We would typically stop at one or more of these pull outs on our way into the park each morning looking for mountain bluebirds, we did not get any bluebird pics there but we did get some cute unita squirrel pics. 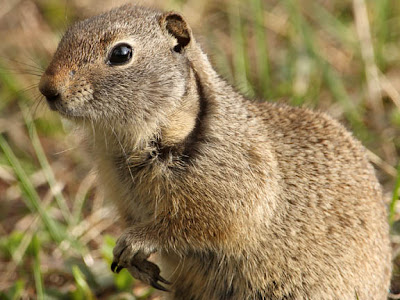 In the same location I also got a shot of this red tree squirrel. These are pretty common all around the US but I took the pic because I really loved the look he was giving me. It was like, "what are YOU looking at?" 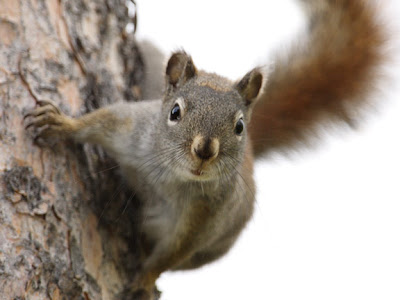 In Yellowstone you can also find rodents in the water. We spotted this muskrat swimming in the Yellowstone River. While we parked he turned and began to swim up Otter Creek. He was working hard, swimming against what looked to be a pretty strong current, so he stopped to take a rest on a rock, which gave me the opportunity to get a pretty good shot. 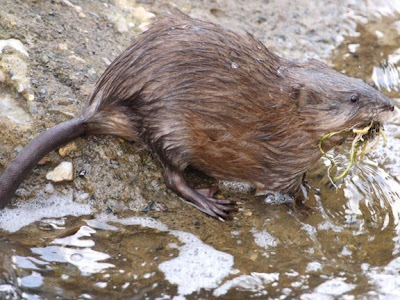 Other rodents that we were looking for included marmot, beaver and pica. The marmots pics we took have already been posted. We did see 4 beavers on Friday night but it was getting dark and they were a ways away so the pictures were not that great. We were disappointed to not see any pica this year. We stopped two times at a talus field near Mammoth that we have easily seen picas at on past trips but despite a lot of searching there were none to be found.
Posted by Ecobirder at 11:37 AM

Great blog site, I'm glad I found it. It's pretty neat to see the wildlife species you have so far north of where I am (Central Texas). Keep blogging! I've bookmarked it!

Thanks for visiting. I hope that you come back often.

Great photos & blog, but as a pica lover I must point out that Picas are not rodents but rather members of the rabbit family. When they move, you can see the 'rabbit-like' hind leg. Definitely not a rodent!

Was just there. Saw your buddy the Unita ground squirrel and Badgers, Coyotes, Moose, Elk, antelope, bison and the Lamar Valley wolf pack! Amazing trip! Can't wait to go back.