This year we saw a lot more waterfowl in Yellowstone then we usually do. I am guessing that the reason had something to do with the weather. Up in Yellowstone spring was way behind. There was a lot more snow on the ground then we usually see, Yellowstone Lake was pretty much still completely frozen, this is the first time that we have seen it this way in the past 8 years, and we were told that Dunraven Pass, which is scheduled to open up Memorial Day weekend each year, still had something like 24 feet of snow. Where there wasn't snow there was snow melt. Streems became rivers and many fields became lakes. It may also have had something to do with the fact that to the north of the park Montana had very low water levels. This of course is all just speculation. 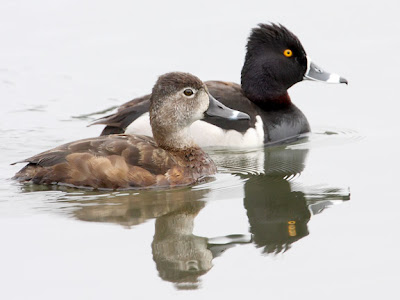 The fact was that there were more water around and we took advantage by getting some good pics. I found these ring-necked ducks on Saturday as we were driving through the park on our way to go back home. Even though it was pretty cloudy and drab they still threw a nice reflection in North Twin Lake. 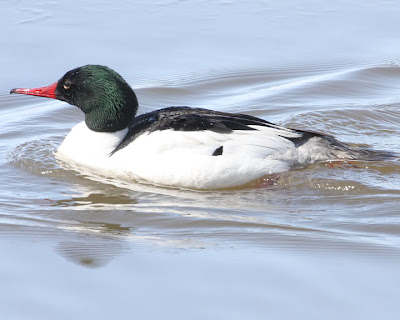 On Friday we went a little way up the east enterence to check for bears, a grizzly with a cub had been spotted there on Wednesday. We did not find any bear but there was a little water down in Mary's Bay on Yellowstone Lake and we found a pair of common mergansers. 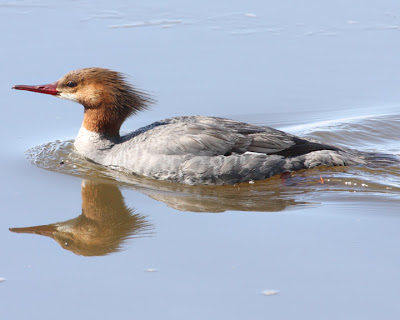 We usually get common mergansers in Minnesota, in the winter, but they are not usually as cooperative. This pair was fairly close to shore and was swimming slowly giving us some nice pics.
Posted by Ecobirder at 3:19 PM