One of the birding highlights from this years trip to Yellowstone was our opportunity to photograph golden eagles. This was not the first time that we had seen golden eagles in Yellowstone. We had the pleasure of taking pictures of an active nest back in 2006 near the north entrance, however the nest was a good distance away and my camera equipment was not as good as it is now. Since then we have checked the ledge where the nest was located but the eagles have not returned. 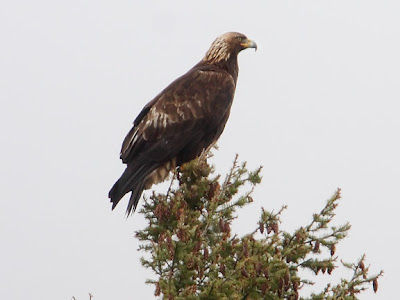 This year the eagles were not at that location either but on Thursday as we were traveling through the eastern portion of the Lamar Valley, near Soda Butte, we noticed a large bird in a dead tree at the top of the hill. We could tell it was a raptor but from that distance with the poor visibility, that day was cloudy and snowy, it was hard to tell what type while driving. Michelle thought that it might be a vulture, mostly due to its size, but it did not look like a vulture to me. We were in an area where there was no parking so we drove down the road to the nearest parking area and I grabbed my equipment and began walking back. Once I got a bit closer I trained my camera on the bird so that I could identify it. I saw the golden nape right away and knew that I was looking at a golden eagle. Before I could get much closer the eagle took off and flew out across the Lamar Valley. I was disappointed to only get a few shots, many of which did not turn out well due to the distance and the poor light, but at least I got a couple of shots that were OK, like the one above. 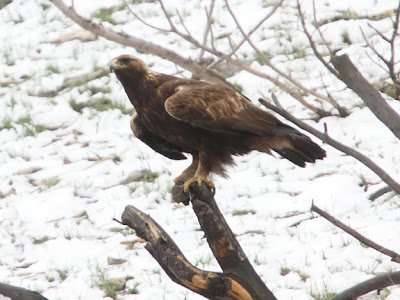 We continued out of Yellowstone to visit the small town of Cooke. On our way back Michelle spotted the golden eagle in about the same location as we saw it on our way out. We parked again and I headed out on foot to try for some more pics. This time I was able to get closer but I was getting a lot of back light from the stormy clouds behind the bird. This was making it difficult to get any detail in the pics. While I was shooting the eagle let out a cry, which was pretty cool, and a second eagle came soaring out from behind the hill. The second eagle landed on a dead tree sitting on the ground right at the top of the hill. I changed my position to shot pics of the new eagle, the light was still horrible but better then the light I was getting shooting the first bird. after a short while the second bird took off over the hill followed shortly by the other bird. On my way back to the car I had to signal for Michelle to come and pick me up because I found that there were 3 large male bison coming up the road between me and the car.
Posted by Ecobirder at 4:07 PM

Wow! I'd love to see a Goden in the wild. Heck, I've never even seen one captive.

A photo of an eagle is always thrilling!

I really liked this one...the pictures are wonderful and the story is perfect...I just love any stories about eagles...goldens are my favorites...this was my favorite post until you do another eagle one!!!You got some good camera equipment there, goldens do not let you get close.