Yellowstone is home to 3 members of the canine family, the wolf , coyote and fox. The coyote has adapted well to living around civilization, which has helped the coyote population, through out North America, to increase. In Yellowstone, however, the coyote population has been decreasing as the wolf packs have become stronger and their numbers greater. Because they are competing for prey the wolves will often kill the coyotes. As the coyote numbers decrease the numbers of fox increase, since coyotes view the fox as competition and will often kill them while wolves do not compete directly with the much smaller fox. 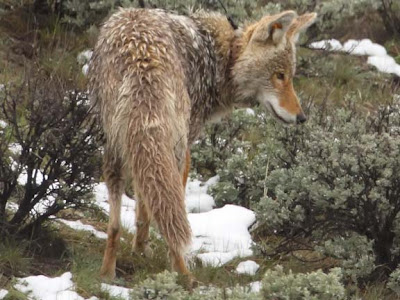 Most of the coyotes that we saw this year were near Canyon Village. However we did see a few, like the one pictured above, out in the Lamar Valley. The Lamar and Tower areas of the park had very little snow left. 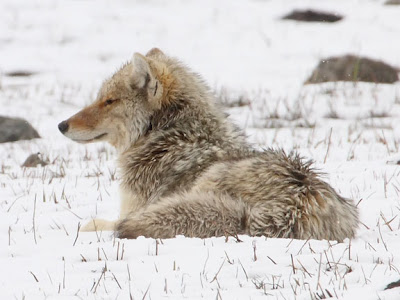 Over by Canyon Village and Hayden Valley the snow was quite a bit deeper. 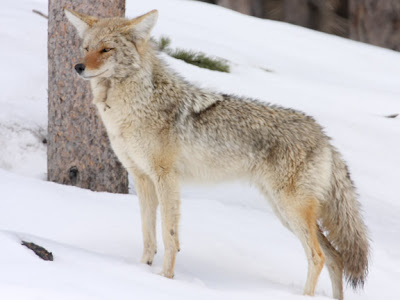 We spotted this coyote coming down the side of the road that lead into Canyon Village. 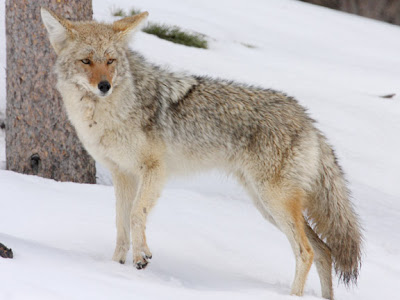 When it got to the end of the road it began to run in a circle around a pair of boulders. It was chasing some prey, probably a unita ground squirrel or a chipmunk, but I could not see what it was. 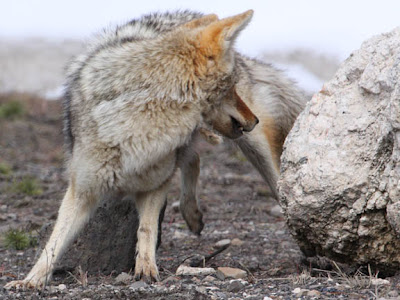 On this occasion the prey escaped. I was disappointed, I would have loved to get a pic of the coyote catching its prey, but I am sure that the coyote was more disappointed and probably hungrier too.
Posted by Ecobirder at 3:20 PM

They are beautiful in their own way. We often heard them yipping at Mammouth in early fall.

I love the coyote as much as the wolf - your photos depicted them beautifully. I saw my first coyote this year walking across the lake ice - he was one hungry coyote! Made me sad.

I'm am still amazed at the wonderful wildlife you encountered at Yellowstone-I can't wait to see more that I am sure you have ready to post. The trip must have been magical...